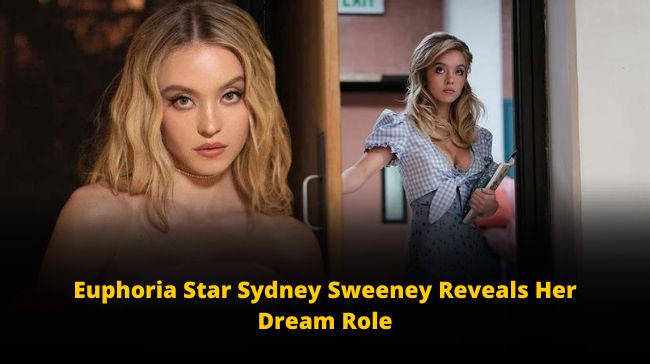 Sydney Sweeney continues to surprise her fans both in and out of her many acting roles.

The actor has her fingers in a lot of pies, from her blackbelt in MMA to fixing classic vehicles to founding her own production company.

Sweeney’s parents pushed her to fall in love with as many things as she could as a child. The performer has taken that counsel to heart, and she continued to pursue her numerous interests far into adulthood, much to the delight of her millions of fans.

Recently, Sydney Sweeney revealed her dream role, which stunned the fans. Curious to know what she revealed? Read the complete article.

Sydney Sweeney knew she wanted to be an actress since she was a child. Sweeney has a wide range of interests, but her passion for acting began at a young age.

This rich imagination of the actress was nurtured as she grew up in Spokane, Washington. She was always making up stories in her thoughts, and when she discovered that pretending to be someone else might be a lucrative career, she was hooked.

Sydney Sweeney revealed when she realized acting was her love in an interview with the Emmys.

She stated, “I just, I always knew that I wanted to play in as many imaginary worlds and characters as possible.”

“I had fun, imaginary friends that I would play with and things I would create. And once I realized movies and TV shows were basically imaginary worlds brought to life, and that could be a job, I was like, ‘Oh my god, I want to do this.’

I would always put on little performances for my parents and grandparents. And I think that is how it all began.”

In only the last few years, she has dabbled in myriad genres. The 24-year-old appeared willing to embrace anything, from comedic dramas like The White Lotus to sensual thrillers like The Voyeurs.

What else is on Sydney Sweeny’s to-do list though? What part would she most like to perform in the future? Fans may skip a heartbeat by her answer.

But playing extremely interesting, wacky characters like [Mrs. Lovett in] Sweeney Todd is a dream of mine.”

Sweeney remarkably excelled in Season 2 of Euphoria because she had a flair for the theatrical. Cassie, her character, had a few over-the-top moments.

Sydney Sweeney’s approach to eccentric figures like Bellatrix Lestrange and the Red Queen would be fascinating to witness. After her appearance in ‘The White Lotus,’ Sweeney wants to pursue more humor.

Though “crazy characters” like those played by Helena Bonham Carter are at the top of Sweeney’s wish list, she also wants to do more pure comedy.

The first step of the actress was into humor The White Lotus, and she thoroughly enjoyed it. Working with people like Molly Shannon and Jennifer Coolidge was like a comedy boot camp for her, stated the sports enthusiast.

“I really enjoyed finding the comedy with Olivia,” Sweeney shared of her character in The White Lotus. “And I think I was able to kind of bring a little bit to Cassie as well. So I would love to do some more projects that dive into the more comedic side of my acting.”

What is your take on Sydney Sweeney’s acting skills and choices of roles?

Which is your most loved role of hers? Drop your answer in the comment box below!