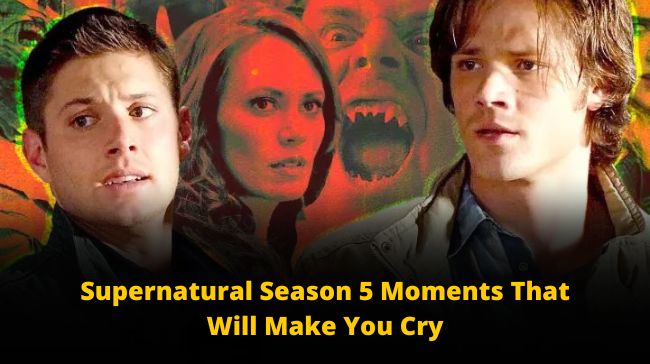 If you are a Supernatural season 5 fan and you say you did not shed a tear – you are lying!!

Supernatural is an American TV created by Eric Kripke. Its first episode was aired on 13th September 2005.

In this series, we have witnessed a marathon of 15 seasons of sad departures, deaths, and apocalypses.

In the initial 5 minutes, we see how the Winchester family is ripped apart by the sudden demise of Mary Winchester, who gets consumed by the sentient fire.

The series is loaded with some super emotional moments. So, Sassyshows is here with the list of the most painful moments in Supernatural Season 5.

These Supernatural Season 5 Moments Will Make You Cry!!

The leading characters of the series Supernaturals, Sam and Dean Winchester are brothers who have been following their father’s footsteps as hunters and fighting supernatural and evil beings of many kinds including monsters, and demons and not to forget Gods that have been on Earth for a trip.

Their dedication and love for one another are extreme despite going through many phases of disagreement and strainful events throughout the series.

Their father, John Winchester, has been on a spree to kill all the devils, evils, and monsters that come their way. This all began after John lost his wife when his boys were little.

The brothers took over this journey to find out the supernatural power who killed their mother and also in search of their recently missing father.

But after their father’s death, the boys continue their family business of saving people from demons, devils, demigods, and more such supernatural powers.

Sam & Dean, who have begun their journey to save the world, have to give up a lot on this way. We witness many such moments when sadness prevails and we see a tear rolling down our eyes.

Abandon All Hope – and yes we did!!

There is no need to say why this has a spot here on our list. The tragic and heroic death of the mother-daughter duo had all our hearts broken.

Ellen and Jo Harvelle are the best mother-daughter duo you could find around at Supernaturals.

When they sacrifice themselves to hellbound is the moment when the entire Supernatural fanbase did abandon all hope.

When Jo was ripped from limb to limb and died a slow and painful death, was the Supernatural Season 5 moment that every one of us who witnessed this did feel our heart-shattering.

The fandom was not ready to accept the sacrifice of the Harvelles. There were comments of the heartbroken fans questioning whether their sacrifice was even necessary?

The Harvelles were claimed to be equally skilled at hunting, just like the Winchesters, then letting them go just so that Winchesters could continue was not a sufficient reason for the fan.

The Hard-hitting Finale of Supernatural Season 5

The Winchesters have always been known for self-sacrifice. When both Sam and his half-brother Adam dive into Lucifer’s cage and live up to their motto of saving the world from the vengeance of Luci & Michael.

This is how the youngest Winchester brothers get hellish imprisonment.

Also, Gabriel giving up his life to save Sam and Dean was so brave and had our eyes filled with tears!

Supernatural is definitely a series that has made us go through a roller coaster of emotions. And when we say we are Supernatural fans, we mean we did shed a tear or two every time we watched it!!

Read More – Yellowstone 1883 Season 2 Will Change Everything For The Franchise!! Here’s How!!