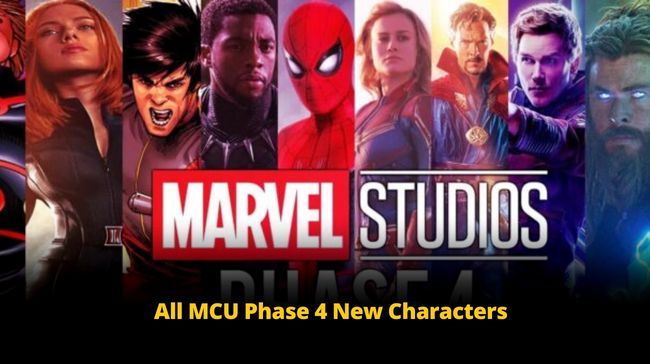 What is happening in your universe!!! Are any new faces around??!!

If not, take a back seat and catch on to phase 4 of the MCU!

The Marvel Cinematic Universe is bigger than ever before. With the release of TV shows alongside movies, many new faces have recently been introduced to fans.

Post the traumatic row of gruesome deaths of our many superheroes in the fight with the mad titan Thanos in Avengers: Endgame, the fans were waiting for the MCU phase 4 new characters.

And definitely, there was an absolute need to introduce new faces. Acknowledging this need, the comic giants have done the needful. Let’s check out the MCU phase 4 unique characters:

MCU phase 4 new characters who will lead the universe Agatha Harkness – even though she was trapped in the persona of Agnes, she will be back at Disney+ in the series Agatha: House of Harkness. Monica Rambeau, played by (Teyonah Parris) will be getting a stage role in the sequel of Captain Marvel, famously known as The Marvels. Billy AKA Julian Hilliard and Tommy AKA Jett Klyne, as created by Wanda, might be featured in the Young Avengers – a project of the MCU.

The Falcon and the Winter Soldier US Agent/John Walker played by Wyatt Russell – We might get to see him in the yet-to-release Thunderbolts. Joaquin Torres, too, might be the new Falcon to the new Captain America.

The Watcher And many alternate versions of established characters hailing from different timelines. The Watcher will be back with season 2 of What If, but there is no clarity about other feelings.

This movie from the MCU has introduced many new faces like Sersi, Dane Whitman, Makkari, Thena by Angelina Jolie), Eros, Pip the Troll, and a few more. The ones who died in Eternals have not been included as their return seems unlikely for now.

These above characters might return in the sequel to Eternals but is the sequel even in the pipeline is something we are not sure about.

These and many more projects have introduced MCU phase 4 new characters. Be it series or movies, each of them has played a vital role here in establishing prominent characters.

Be it Loki, Black Widow, Shang-Chi and the Legend of the Ten Rings, Hawkeye, Spider-Man: No Way Home, Moon Knight, Doctor Strange in the Multiverse of Madness, Ms. Marvel, or the latest one Thor: Love and Thunder.

All the shared TV shows or movies have introduced such important characters as MCU Phase 4 new characters, which we are sure might have a piece of the stage in the grander projects of the MCU.

We are eagerly waiting for how the lives of MCU Phase 4 new characters are unveiled!!! Are you ready for the same????