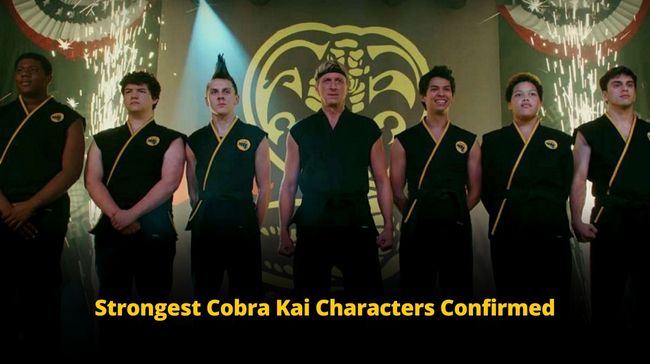 Today we are here with something you need to know about the strongest Cobra Kai character and a few more powerful ones!!!

As Cobra Kai season 5 has been released, it has uplifted the ante more than the previous installments of Netflix’s “The Karate Kid” spin-off.

While this series contains complete waves of laughter, charm, and Nostalgia, the battle of the soul of All Valley’s karate scene has never been more intense… Thomas Ian Griffith, who is playing the role of Terry Silver, is hall-bent as he expands and reaches his corrupt karate dojo.

And by Nature’s grace, there is plenty of brawling done in Cobra Kai season 5, and many of the characters are experiencing some ups and downs while they are coming ahead.

The violence is very much what makes this series unique, and it has been evidenced by everyone who has watched this. But war is never pretty, Am I right?

Everyone is saying that when it comes to fighting, the art of karate, “Cobra Kai,” is always in the first place. Three warriors are best at fighting and karate.

And with that in mind, let us talk about the top three most powerful warriors in Cobra Kai season 5.

The Fifth season of Cobra Kai has boosted its share of the young talented fighters, but in the end, the old complex characters have stood out as the most dominant warriors in the All Valley.

This became evident in the final episode, in which some of them decided they had enough of Terry Silver and went looking for trouble.

Who are the strongest Cobra Kai characters? First comes Johnny; he has already single-handedly defeated a gang of villainous senseis when all hopes seemed lost. He is spurred by the desire to be a godfather, has found his inner assassin, and has overcome the odds to the tune of Airbourne’s Runnin wild.

Here comes the second one, Chozen. He is an unstoppable machine. He is firm and assertive. He has been the unstoppable machine in most of the seasons. He even got the better of Terry during the blade fight that happened in the finale, which was knocking him on his butt during the process.

But after Chozen shows his mercy, the villain makes the last laugh, and Chozen turns his back on him. This gives Terry a chance to attack. Then  he said, ”There is no denying that he was Chozen’s for the taking.”

Here comes the third one Mike Barnes. He proves he hasn’t lost a step since “The Karate Kid Part III.” And in fact, He is the only person who took on Chozen and came out of the fight unscathed, as the confrontation between them was already done earlier in the season, and it was an even fair contest. We hope you like our articles, and please follow us for more regular updates!