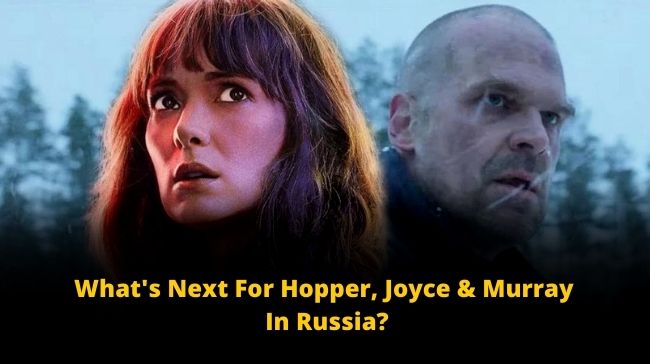 Curious to know what will happen to Hopper, Joyce, and Murray in Stranger Things Season 4 Volume 2? Here is all we know so far.

The first teaser of the show featured Hopper’s escape from the Starcourt Mall, which relieved the fans. However, the twist in the show came off as a sudden shock for the fans: Hopper’s capture by the Russians and his imprisonment in Kamchatka.

Teasers hint at Joyce and Murray’s teamed adventure to rescue Hopper, which is shown in Season 4 Volume 1.

In volume 1, Joyce receives a suspicious package from Russia which at first he’s skeptical to open.

He informs Murray about the arrival of the package, who advises Joyce to be careful with the package and to make sure it’s not a trap.

However, upon opening the package, Joyce discovers a note attached to the doll, informing about the survival of Hopper and the phone number which is later revealed to be the contact number of a Russian prison security guard named Dmitri Enzo ( Tom Wlaschiha).

Dmitri tells Joyce to provide a ransom of $40000 in exchange for which he would free Hopper with the help of smuggler Yuri (Nikola Duricko).

However, in Kamchatka, Hopper is informed by Enzo about the matter and said that his chance of escaping was one in fifty.

Hopper bribes a fellow prisoner with his meal in exchange for the prisoner breaking the shackles of his feet.

When freed, he’s told to escape to the church in a nearby town to wait for Yuri. But unfortunately, Yuri backstabs Hopper and turns both Hopper and Enzo in, and runs off with the money.

Yuri also tried to drug Joyce and Murray to turn them into KGB but failed due to their plane crashing.

Enzo and Hopper are then put into a group of prisoners against a monster in the yard, which is revealed to be a Demogorgon.

Meanwhile, Demogorgon manages to kill every prisoner aside from Hopper and Enzo themselves, thanks to Hopper’s flaming spear.

While the fight is happening, Joyce and Murray manage to take over the control room of the prison and open the gates of the prison for Enzo and Hopper to escape.

Upon his escape, Hopper finally reunites with Joyce and Murray after months of disappearance. However, their joy of reunion is hinting to be temporary, as the next fate for them is not at all pleasant in Stranger Things Season 4 Volume 2.

The show ends in the premise of Joyce, Murray, and Hopper’s further battle with the prisoners, guards, and the Demogorgon, which will be continued in the Stranger Things Season 4 Volume 2.

The preview of volume 2 at the end of the first one shows Hopper exploring the Russian facility where he locates another Demogorgon inside a tank. Hopper is seen to be running with a gun along with Murray getting hold of the flamethrower.