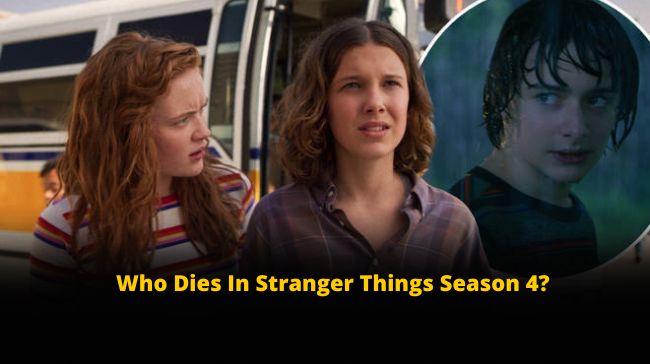 We know today is that day for all of us, which we have been waiting for since we last saw the finale episode of Stranger Things Installment 4 volume 1!!

The set of unanswered questions, which have been creeping into our minds, have been answered to an extent. But the bridge to Season 5 holds lots more!!

With Season 4 volume 2 releasing on Netflix, we have witnessed all that we were unprepared for!

Please consider this a warning, as anything beyond here can be considered Stranger Things Season 4 Volume 2 Spoilers!!

The opening of Season 4 hinted that there is a bloodbath ahead for us!! The first episode initiated with a gruesome scene where all the Hawkins Lab kids were murdered brutally, except for El and Papa, aka Dr. Brenner. In this season, considering volume 1 and volume 2, we have witnessed so many deaths that we have never seen in the previous seasons!!

Who Dies In Stranger Things Season 4? Bid Adieu – To many of our Favorite Characters!

In Chapter 1 of Season 4, Volume 1, the brutal death of all the students of the Hawkins Lab was a terror.

Following it, the death of Chrissy was incredibly heartbreaking. Even the Duffer Brothers regretted putting an end to the favorite cheerleader of Hawkins. That too was when some love was blooming within the relationship of Eddie and Chrissy!!!

In Chapter 2 of Season 4, we witness the flashback of the death of a mysterious teen. This makes Fred feel guilty, and no wonder we have Vecna behind his back!

So when Fred stays with Nancy, Vecna’s creepy entry with clocks from Upside Down marks the end of Fred in Season 4. Thanking our stars, we saw no deaths in Chapter 3 of Season 4!!

Chapter 4 of Season 4 marked the end of a handful of Russian soldiers while Hopper was trying to escape.

But we consider it a fair deal because it was either Hopper or the soldiers, and we choose Hopper any day!! The Creel Family has been murdered brutally, and the prime suspect in it was Victor!! Though we all know who Victor survived!!

Saddening death of the protector

The Saddening death of the protector of the California crew – Agent Harmon succumbed to his injuries when he was shot while saving the crew.

Poor Patrick McKinney tried convincing his friends who did not believe him, and ultimately his fear was genuine as the Big Bad Vecna was behind his life, and Patrick couldn’t survive it.

The Guards at Hawkins Lab should have known that coming in El’s way was never a good choice. They faced the consequences by breathing their last breath!

Chapter 6 had its own game to play. Hoppers tried his best to make the prisoners of Kamchatka aware of the danger they would have to face, but none believed him and died facing Demogorgon.

The massacre at the Hawkins Lab was a heartbreaking moment for all of us. But now we know via Chapter 7 that Vecna, aka Henry Creel aka One, was responsible for the attack, and everyone there faked their death except for El and Dr. Brenner.

The most giant alert of Stranger Things Season 4 Volume 2 spoilers is the death of Papa, aka Dr. Brenner, as Sullivan and his government agency shot Brenner. He asked for forgiveness from El, who left him to die.

He became a hot favorite since his debut in Season 4, Volume 1. His heroic death sent a shock wave to all of us!! With the opening of the Upside Down gate, it ripped Jason’s body, which was placed there in hard luck! Many residents of Hawkins lost their lives as the gates of Upside Down opened.

Maybe the number might increase. The Stranger Things Season 4 Volume 2 spoilers also include that Max Mayfield is also expected to be gone this season, but there might be a probability of her presence in Season 5.

We are glued to the Stranger Things season 4 Volume 2 and are waiting for Season 5 to air at the earliest.

That’s the only way for us to witness the changes happening in the lives of our favorite characters!! (Few left, though!!)

Read More – Will We See The Stranger Things Victor Creel In Season 4?