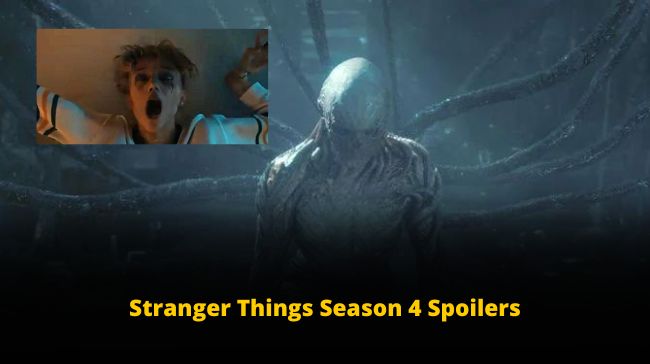 Hello, Fans… The most horrifying season of the famous sci-fi drama Stranger Things season 4 is now available on Netflix from 27th May 2022. So, Sassyshows is here with some amazing Stranger Things Season 4 spoilers.

The new season of Netflix’s thriller, Stranger Things has dragged the fans to the edge of their seats, watching one episode after the other.

This has created a great deal of excitement which makes us wait eagerly for the release of the 2nd installment of season 4. So, before the second chapter unveils, let’s check out some insane Stranger Things Season 4 spoilers.

The Duffers Brothers agreed that they do have some moments when they regret what is done. And when they have no option to undo it is more saddening.

This situation occurred with Matt and Ross Duffer on the death of the troubled yet lovable cheerleader Chrissy.

As per the Stranger Things Season 4 spoilers, she became the victim of Vecna in the very first episode.

We are assuming that our fans have already watched the much-awaited Season 4 of Stranger Things.. But if in case you are due to check it out, then kindly consider this as a warning for Stranger Things Season 4 spoilers on our way.

If the fans have missed out on the first episode of Season 4 and move further from here as this article can be considered as Stranger Things Season 4 spoilers article!

It was a dreading view to witness Chrissy, aka Grace, coming under the spell of Vecna and facing a horrifying death.

The Duffer brothers did reveal how they wished they could undo the move and chose not to kill Chrissy. The chemistry shared by Eddie and Chrissy was so much fascinating and created an aura, and the viewers were super eager to witness more of their love story.

But now, there is no coming back for Grace from “this kind of death.”

The directors revealed that by the time they realized the actor’s potential and the character, the fate of Grace, aka Chrissy, was already sealed.

There Is No Coming Back!!

The scene shot between the two actors, Eddie and Chrissy, revealed great potential for this unlikely couple.

Still, unfortunately, this scene was shot after Chrissy’s death, so it was no way to go back to portraying their blooming love story.

The viewers of Stranger Things claim this to be the worst death of all the Seasons. Oh, fans, how sad were we to witness the horrifying death of Chrissy!!! Was it the same with you?? Avoid reading the Stranger Things Season 4 spoilers and go and watch the season 4 now!!!!!