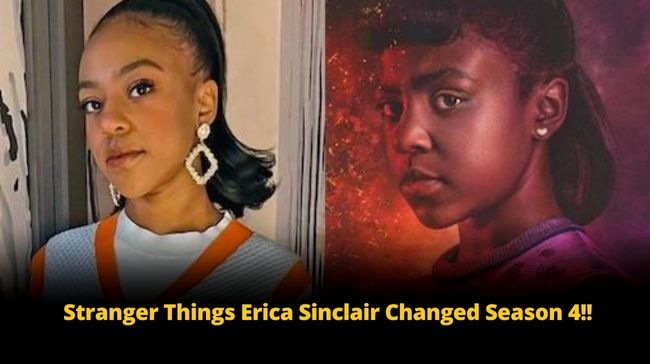 The Stranger Things fever seems to be going on for an era now, with a new daily highlight!

The Duffer Brothers and the happy Team of Stranger Things are in the absolute mood to celebrate their fandom’s immense love and acclaim.

And we, too, are in awe with the pretty pointers being brought to our notice, either by the Team or by the Fanclub. This proves that even after a week-old release of Volume 2, the fans are all head over heels for the Stranger Things characters, story plot and the BTS collection.

While the main characters got immense support from the fans, Stranger Things Erica Sinclair got under the limelight with her mind-boggling appearance. Here is how she changed season 4!!

The Little Sister – A Trope Played By All

We are all aware that a series introduces new characters almost with the fall of every new season.

The most intriguing character is that of an “Annoying Little Sister”. We witnessed such characters being introduced in Black Panther, Drake & Josh, Arthur and even more.

The things are the same with Stranger Things as well…. When the writers introduced the annoying little sister to our main character Lucas.

So we get to see Lucas’s little sister, Erica  Sinclair, aka Priah Ferguson. Within no time, she has proved herself, and we are sure she can walk hand in hand with the entire gang!

We relate to the character of Stranger Things Erica Sinclair as many of us are also one of those in real life.

Her role has been portraying that perfect little sister whose only will and wish in life is to make fun of his elder brother Lucas and ensure to add pranky hurdles in his life. This was quite common to see in seasons two and three.

But when it came to Season 4, Erica Sinclair got a firmer ground to play with some powerful moments to shine along with the main characters.

In the entire Season 4 of Stranger Things, we see Erica playing a substantial role by saving the Team and being of help to them in needful situations.

In the final Hellfire meeting, where Lucas could not be present, Erica Sinclair was chosen to be his substitute. Erica Sinclair had her share in the epic battle with Lord Vecna, which helped her win the game. Her bold nature made her the new favorite of all the Stranger Things Fans!!

All love her brave and outspoken character. Her confidence with which she stands by her friends, calls a spade a spade, and shares her wisdom in sarcastic ways, is winning our hearts. She also holds the image of that young girl who is sure to have an identity of her own.

We are confident that the Duffer Brothers would not miss this and have Erica Sinclair as one of the main characters in Season 5. She has created her strong identity in Season 4, and we all want to see more of her in Season 5 as well!! We love you, Erica!! Do follow us for more such updates!