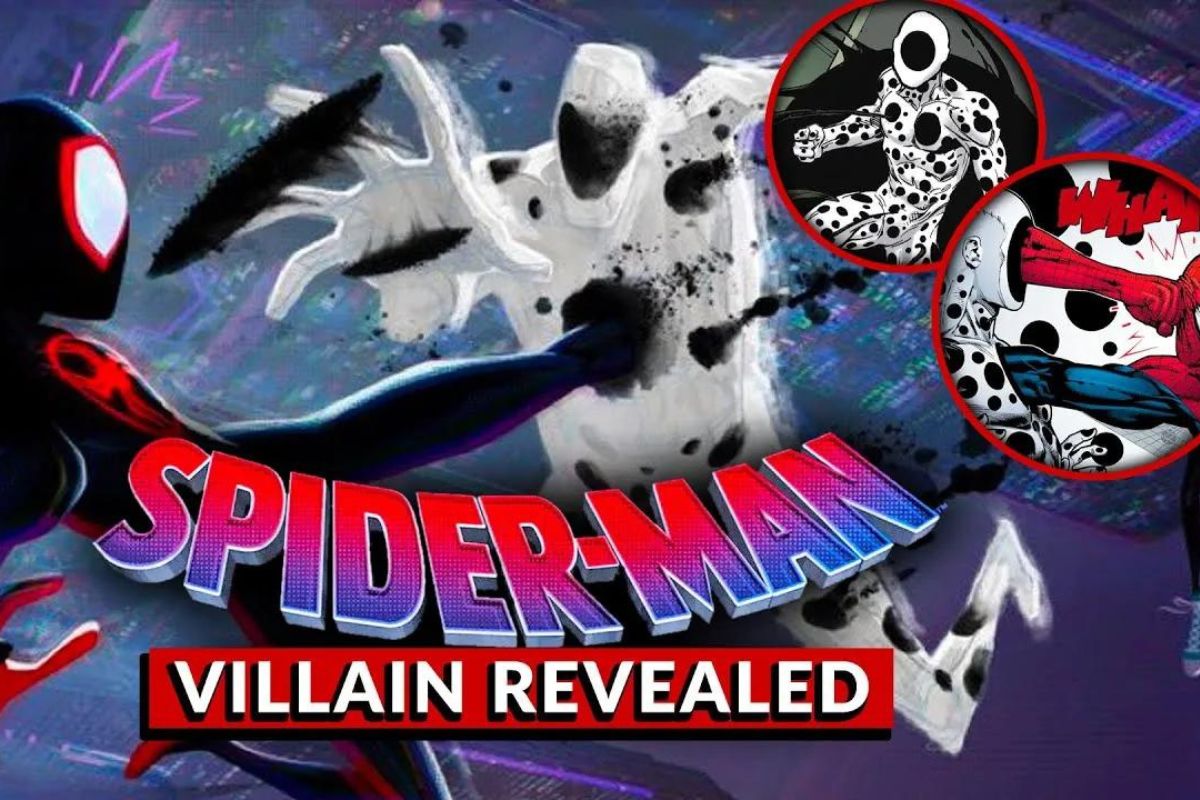 It follows the tale of Miles Morales, an Afro-Latino youngster from New York who takes over as Spider-Man after Peter Parker (Chris Pine) dies. Then he encounters various Spider-People, such as a talking pig, an anime girl, a noir Spider-Man, a female Spider-Man, and so forth.

Similar to the first film, which was psychedelically spectacular artistically, the sequel will allow viewers to explore other universes. A script by Phil Lord, Christopher Miller, and David Callaham is used in the movie, directed by Joaquim Dos Santos, Kemp Powers, and Justin K. Thompson.

So, with so much hype around Spiderverse 3, the fans were curious to get updates on Spiderman Spiderverse 3 villain. So, who is he? Here is all we know.

Who Is The Spiderman Spiderverse 3 Villain?

The Spot, whom Jason Schwartzman will voice, is slated to be Spiderman Spiderverse villain, but according to Total Film, the villain has a broader role to play.

According to director Kemp Powers, “The Spot is an interesting adversary because he seems like a joke, but when you truly look at his powers, there’s enormous potential.” The director stated, “His power to open portals across dimensions sets him up ideally for the Spider-Verse,” indicating the character’s function as the film’s antagonist.

“He is the antagonist in the upcoming two movies. Let’s say that Miles and The Spot have unexpected connections. The Spot will consequently significantly impact how the movie turns out, although little is known about the threat he will pose.

Instead, according to an early summary for Across the Spider-Verse, Morales will have to battle “a team of Spider-People,” engaging in combat with numerous ostensibly friendly and unknown characters.

What Do We Know About the Spider-Man Universe?

Despite not having the same title, Spider-Man: Beyond the Spider-Verse is still tied to Across the Spider-Verse, as seen by the confirmation that the Spot will remain the Spiderman Spiderverse villain.

The two movies were first announced as Spider-Man: Across the Spider-Verse Part 1 and Part 2 in December 2021. The second movie’s name was changed to Beyond the Spider-Verse in April 2022. Despite the moniker change, there will still be a cohesive plot that runs throughout all films.

As Powers has stated, the Spot would continue to play the Spiderman Spiderverse Villain.

Spider-Man Vs The Spider-People

Fans may anticipate a variety of Spideys, including both authentic to the comics and creative variations. These include the recurring characters Peter B. Parker (Jake Johnson) and Spider-Man 2099/Miguel O’Hara (Oscar Isaac), as well as some newcomers like Spider-Punk (Daniel Kaluuya) and Scarlet Spider.

In addition, Spider-Gwen, who Hailee Steinfeld once more voices, will appear in Across The Spider-Verse. Gwen will be animated in a “watercolor-wash manner” comparable to “the covers of her comic books” when she first debuts in the movie, notably in her home world of Earth-65.

Into The Spider-Verse, the first movie in the series was released in 2018 to positive reviews. It focused on Morales, played by Shameik Moore, teaming up with other Spider-People from other parts of the multiverse to prevent Kingpin from tearing a hole in reality.

It won the Golden Globe and the Oscar for best-animated feature Film. On June 2, 2023, Spider-Man: Across the Spider-Verse is scheduled to be released in theaters.

Read More – How Powerful Is Adam Warlock? His Powers Will Shock You!!