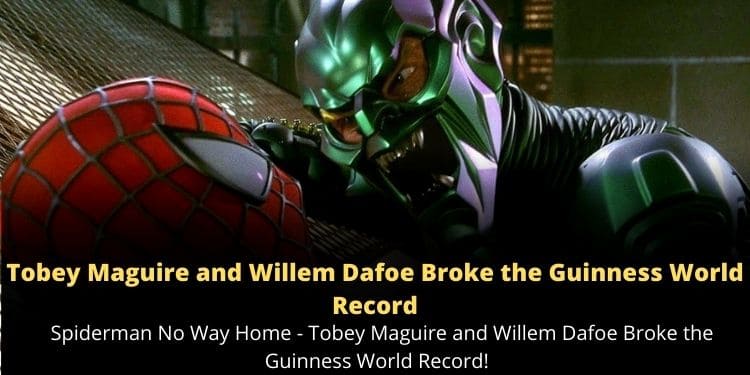 Spiderman no way home is not only breaking records at the box office in the business but the film has now also entered the race of breaking the Guinness Book of World Records. The new Marvel movie brought back actors from its previous Spider-Man film franchises, and the stars of the very first Spider-Man were also included like Tobey Maguire and Willem Dafoe.

Since these two actors, Tobey Maguire and Willem Dafoe reprised their roles just the way they should be technically it brought a continuation of their original series and hence they now have the longest careers ever as live-action Marvel characters. Before Spiderman No Way Home, Tobey Maguire last played his role for Peter Parker back in Spider-Man 3.

And the actor recently took part in an interview with fellow Spidey stars Tom Holland and Andrew Garfield, and he also opened up about what it was like to return to the character.

In 2002 the debuts of Peter Parker and Norman Osborn, Sam of Maguire and Dafoe made Raimi’s Spider-Man hit the theatres. And then after 19 years and 225 days to the first movie, they returned to play those characters back. After breaking the previous records set by Hugh Jackman, who had a career as Wolverine, spanned the 16 years and 232 days between X-Men and Logan.

It has come to know that SpiderMan No Way Home not only won Guinness world records but also helped  Tobey Maguire and Willem Dafoe make individual Guinness World Records for having the longest career as a live-action Marvel character.

SpiderMan No Way Home is one of the biggest films worldwide

And unsurprisingly, the film became a box office behemoth and also the sixth biggest film ever worldwide. Spiderman: No Way Home has crossed $1.69 billion up until now. Which is a very huge achievement.

And It is very unlikely that this record will be overcome anytime soon. And Of the current characters in the Marvel Cinematic Universe, Jon Favreau’s Happy Hogan is the longest-tenured.

He first played his character in Iron Man, back in 2008, and then appeared in the most recent one in 2021’s No Way Home. Samuel L. Jackson will also pass Favreau when the Secret Invasion series arrives on Disney+.

And the trailer of Spider-Man No Way Home was one of the most viewed movie trailers in 24 hours, racking up 355.5 million global views. And this record was previously held by Avengers: Endgame with 289 million views.

Stay tuned for more updates like this. Here on our website, you will be provided with all end-to-end updates with complete details. So, being a Marvel fan you must visit our website frequently.