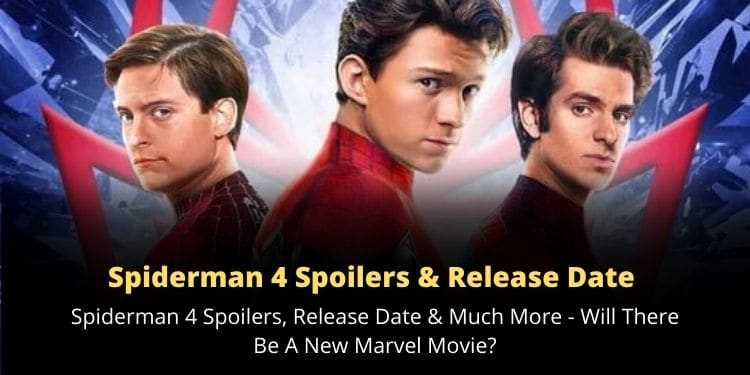 With Spiderman: No Way Home bagging over $1.5 billion at the box office, the popularity of the Marvel character has reached a new height. This has fuelled the hype for Spiderman 4 and the fans are craving to get Spiderman 4 spoilers and release date.

So, will there be a Spiderman 4? Here is all we know so far.

Spiderman: No Way Home has finally wrapped up Tom Holland’s tenure as Peter Parker as it marks the end of his high-school trilogy. Though there is not much news on the future of Tom Holland as Peter Parker, the officials have something big under their belt.

The Marvel boss, Kevin Feige, and producer Amy Pascal have revealed some exciting hints on the upcoming Spiderman projects. So, what’s coming? Is it Spiderman 4?

Will There Be A Spiderman 4?

All Spiderman fans, get ready to jump off your seats, as big news is coming. As per the sources, Spiderman 4 is on the cards. Marvel boss, Kevin  Feige has revealed the big news that Spiderman 4 is under development.

In an interview, Kevin Feige said, “Amy and I and Disney and Sony are talking about – yes where are actively beginning to develop where the Spiderman’s story heads next.”

While Amy Pascal revealed, “At the climax of the movie we just made you see Spiderman make a momentous decision, one that you have never seen him make before. It’s an insane sacrifice. So, that gives us a lot of work with for the next movie.”

Though the bosses of two big franchises have made their statements, neither Marvel nor Sony has officially announced anything on Spiderman 4 release date.

However, Sassyshows has got some latest Spiderman 4 spoilers. So, here is all you need to know.

Spiderman 4 Cast – Will There Be Tom Holland?

Tom Holland has taken the character of Spiderman to a new level. Whether it’s a high school guy, Peter Parker, or a part of Avengers, Spiderman, Tom Holland has showcased insane performance in all roles.

So, being the man who pushed the popularity of Tom Holland to new heights, will surely be a part of the upcoming MCU projects.

Well, though the fans are craving to see Tom Holland back on the screens as Spiderman, in a recent interview, he quoted, “Maybe it is time for me to move on. I have to take Peter Parker into account as he is a crucial part of my life. If I am playing Spider-Man after I am 30, I have done something wrong.”

However, later he clarified his points saying, “I don’t know what the future of Spiderman really looks like. But Spiderman will always live on in me and I believe that Amy Pascal and the Marvel Studio are keen to figure out what the new chapter of Spiderman will look like.”

Producer Amy Pascal and the Marvel Boss, Kevin Feige expressed they are keen to work with Tom Holland. They said, “As long as he desires to make Spiderman films, we will surely make Spiderman movies.”

Spiderman 4 Spoilers & Leaks – What Will Happen?

As we reach the climax of Spiderman: No Way Home, it’s pretty clear that Tom Holland has lost his identity as Peter Parker as it marks a full stop on Peter’s high-school trilogy.

Peter Parker had lost his Aunt May, and he wished to erase the memories of all identities who knew Spiderman is Peter Parker. Here the story emphasizes the lines, “With great powers comes great responsibilities.”

As per Spiderman 4 spoilers, the future of Spiderman is pretty uncertain as to the characters after all have to serve as the lynchpin to the upcoming projects of Marvel like Morbius and Kraven the Hunter, and Sony’s Venom.

However, at the climax of No Way Home, we witnessed how Sony’s Venom entered the MCU. So, will this be the origin of the Black Spiderman? As per the producers, they are working on something big. Moreover, upcoming projects that are lined up will also help them to shape the future of Spiderman.

Spiderman 4 Release Date – When Will The Next Spiderman Movie Debut?

As of now, nothing is confirmed about Spiderman 4. Marvel boss has only revealed that the new Spiderman movie is in the works. However, there are tons of MCU projects lined up till 2023. So, it will be difficult for the creators to include such a big-budget movie in between.

In that case, we will have to wait till the middle of 2023 to get the next Spiderman movie.

Will There Be Tobey Maguire’s Spiderman 4?

As of now, Sony has not yet revealed its plans for re-introducing Tobey Maguire as Spiderman. However, the fans are pretty excited about Spiderman 4, Tobey Maguire, and Sam Raimi. But the creators have not yet passed any confirmed news.

Follow us for more amazing Spider-Man 4 spoilers in the future. Bookmark our page, so that you don’t miss out on any updates.