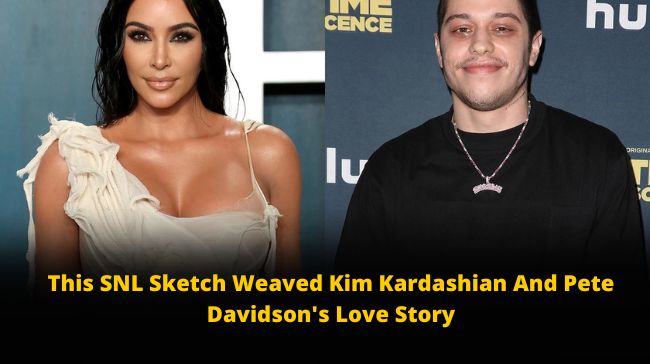 An SNL Sketch pushed Kim and Pete’s relationship? Like seriously? Well, it’s weird but true. Here is all we know.

So people, as everyone knows, no one saw this relationship coming. Plenty of lovey, dicey celebrity relationships have come and gone, but it looks like this one is genuinely precious and unexpected.

Some of our favorite life stories were Ryan Reynolds and Blake Lively; we adore Justin Bieber and his wifey, too.

The relationship between Kim Kardashian and Pete Davidson we never saw coming.

It’s nothing like that. These guys never interacted or talked before, but we didn’t expect the SNL Guest hosting show would give Kim K her new love. Likewise, Scarlett Johannsson also met her husband, Colin Jost, at SNL.

So let’s say it’s not a surprise that it’s a place where cupids meet!

Well, the SNL Sketch Series was a hit

Before Kim K hosted the October 9 episode of Season 47, she wasn’t such a big fan before.

In one of the interviews, she shared that the SNL sketch series was so iconic. OMG, did we mention she had lots of fun during her first hosting gig?

Well, it’s also seen that the team of the SNL was too creative in crafting the jokes, but she handled it gracefully! Ah, but she fell in love with the SNL sketches, and yes, of course, Pete Davidson, too!

Our hearts melted seeing the duo was in power for their first kiss!!

While Kim hosted the show, she nearly ended our seven-year marriage with Kanye West.

Ah, so let’s say she was solidly single. The SNL Sketch of Aladdin as Pete Davidson and Jasmine as Kim K was so cute.

They hover in the clouds on the magic carpet, talking to each other. We guess we have seen that sketch more than 100 times—why are you so cute, guys?

The ultimate relationship between these cuties, Pete and Kim K, started with the famous kiss.

Who thought the hottest Kim K would lead to this? After she hosted an episode of the famous sketch show, where she did an Aladdin-themed sketch with Pete Davidson and shared an on-screen kiss—So romantic, guys?

This was probably one of the show’s best highlights, which later led to a lovey, dicey whole new relationship. The kiss was scripted, but she later shared in a candid interview that what a lovely vibe it was—Aaah, now this is something next level, huh?

She also shared, “We tried something different and it turned into Love!”

Then the rest is all history. She invited Davidson to an after-party where he didn’t turn up. And then, she also called the SNL’s producer for his phone number. Oh my my, we can read this all over again and again!

Read More:- 90 Day Fiance Stars Who Are Breaking Up!! It’s Not A Rosy World!!

Guys, how much do you adore the lovely couple Pete Davidson and Kim K? Would they have ever thought an SNL Sketch Series would have future destiny plans for them? Would an SNL Sketch Series bring them into a relationship? Keep commenting, guys; we love you! Stay tuned for more such updates!