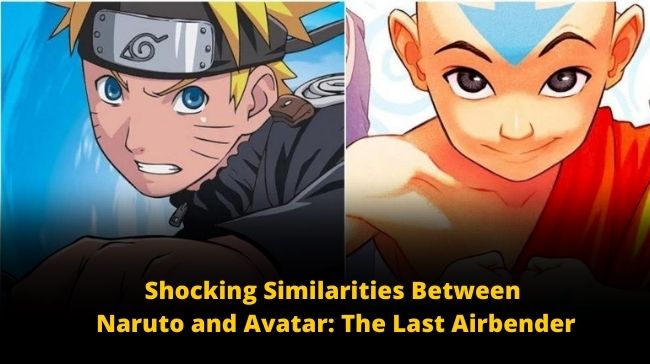 The characters of Naruto Uzumaki and Aang from Avatar: The Last Airbender are entirely different, but they both show a few traits that are alike between them. Let’s read to know the key similarities between these characters.

After airing in Japan, Naruto was aired on the Cartoon Network in 2005. Now, everyone can watch this iconic anime series and witness the journey of Naruto Uzumaki and how he turns into a Hokage from a novice Ninja. The cartoon series has a huge fan base. At the same time, Avatar: The Last Airbender debuted on Nick and proved to be the biggest hit.

This wonderful series spawned right from the creator’s minds, namely Bryan Konietzko and Michael Dante DiMartino. The whole focus is on a kid named Aang who got trained to be the master of four elements, water, earth, air, and fire, and become the Avatar of prophecy.

Hidden Similarities Between Naruto And Avatar!!

Arguably, Naruto and Avatar hold similar powers. Naruto’s Land of Fire is amongst the most powerful civilizations in the series, even if it’s not the biggest.

This resembles the Fire Nation of “The Last Airbender,” which represents itself as the militarized regime committed to ruling over the others.

Moreover, both the shows fall under the Jurisdiction of the most prominent enigmatic figures: Fire Lord and The Fire Daimyo.

Because of the similarities between Naruto and Avatar, fans constantly pit against each other to see which show is better.

Some of the viewers praised the mainstream appeal and longevity of Naruto, while others prayed for the story of “The Last Airbender.”

Both Have Mentors and Guides

One of the key similarities between Naruto and Avatar is their similar relationships with mentors and guides. They are guiding both to figure out important things in life.

From King Bumi of Omashu, Jiraiya “The Pervy Sage” to Kakashi Sensei and Avatar Roku, both have numerous people who serve as their mentors along their journey.

It is always fascinating to watch these anime series and similar elements in the story.

Even after years, no matter how similar the shows are, Naruto and Avatar remain popular worldwide and constantly entertain new viewers.

Both the shows maintained this popularity with locales, characters, and narrating stories.

Read More – Naruto: All Hokages In Order – Who Is The Strongest Hokage?