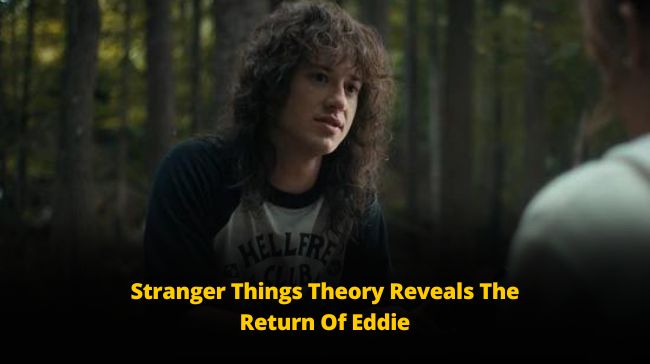 With the drop of the Stranger Things Season 4 finale, things have just gotten out of hand!!!

The final episode of Chapter 4 was a roller coaster of emotions. With many familiar faces bidding goodbye, we are thinking about all possible options and are zeroing down to the best Stranger Things theory.

With the release of every season, the Stranger Things fan club has been growing immensely.

Each season has proved the potential each character has in itself. The cast has also been maturing with time in the series. The actors have confirmed how with every season leap, their performance got better and better.

The Duffer Brothers announced earlier this year in an open letter to their fan club that season 5 will be the finale of the Stranger Things franchise. The writer’s room will begin its work in August, and the finale season should drop somewhere in 2024 or 2025.

Stranger Things Season 5 Theory – Eddie Can Be Back!!

Let us know more about the most discussed Stranger Things Theory.

If the fan club theories are to be believed, then one such approach fits perfectly with all the hints we got in season 4. And to the elite matters more… This theory suggests that we shall have our fan-favorite Eddie back in the game!!

Per the r/FanTheories subreddit, some “Stranger Things” fans speculated that season 4 did not write the final closure for Eddie. If Redditor u/WarrenRifkin  Is to be believed, then the character would face its final destiny on the grounds of Dungeons & Dragons. As per his hints, Eddie’s character is very similar to Kas, who was an undead warrior, a vampire. With Eddie’s love for bat Tattoos and his being shredded by the bats in the Upside-Down, his return could be that of a vampire. Also, the way Kas fights with a spiked shield so does Eddie.

Eddie did not opt for Stranger Things Season 5

In an interview, Eddie clarified that he does not opt for the finale season. Yet. So he assumes his role is dusted off. This is a significant blow to fans of Stranger Things Theory. But we still have hopes because things can turn at any moment with Stranger Things. And we would love to have something changed here.

The fan club is eagerly waiting for more perceptions of Stranger Things Theory. We, too, are excited to get hands-on more with such intriguing theories. Are you excited too??

Watch all four seasons of Stranger Things on Netflix.  Follow us for more such updates.