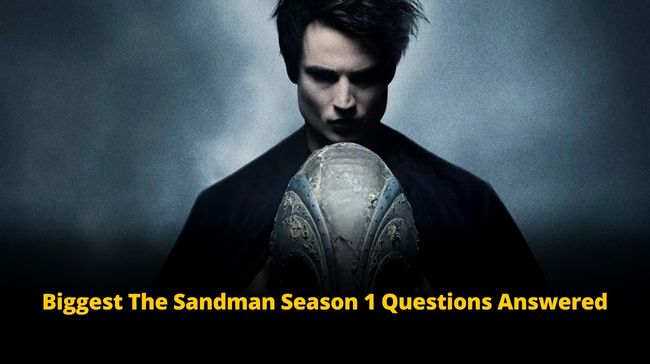 With the release of an epic and much-awaited series – the adaptation of the acclaimed comics by Neil Gaiman – The Sandman season 1 was released this Friday, August 5, 2022, and is available to view on Netflix.

This series is big, bold, but confusing too at some parts. Though being an epic accumulation of the moments, the plot of Sandman season 1 has some potholes, which we would like to share with you today along with the explanation to it!!

The Sandman Season 1 is a powerhouse in the context of performance or storyline, but at some points, you might find the plot to be a little messy.

Though we agree that some confusion is bound to happen when you are dealing with the main character of a Dream!! The series is full of twists and turns, along with many half-told stories.

Disclaimer: Spoilers Ahead. Read at your own risk 😉

The Capture of Dream

In the attempt to capture Death, the British aristocrat Roderick Burgess happens to capture Dream AKA Morpheus and his totems of power – his helm, a pouch of sand, and a ruby.

They are ultimately taken over by Ethel, the resentful lover of Roderick, who is also pregnant with his child. When Paul accidentally makes a blunder, Morpheus is capable of releasing himself!!

Dream And His Totems

It is here where Morpheus returns to Dreaming, his kingdom, also the source of dreams. But sadly, he finds it all ruined due to his prolonged absence. Now Dream visits Cain and Abel so that he can summon Fate Mothers, also known as The Three, who can tell him the whereabouts of his totems.

After successful summoning, the Fate Mothers share with Dream that his totems – the sand has the exorcist Johanna Constantine. At the same time, the demon of Hell holds his helm, and the son of Ethel has his ruby. Morpheus begins his quest to get his totems back.

The Journey To Eternity

In the quest for his totems, Dream passes through many situations, and thus this series is undoubtedly a roller coaster of emotions. It is breathtaking to view the cinematography and the storyline of the series. Morpheus, who is the lord of a mystical realm also known as the Dreaming, is the one who is the keeper of the dreams of all humanity. He has siblings that are – Death, Desire, Despair, etc., and they are known as The Endless.

The rich guy obsessed with magic fantasizes about conquering Death in the waking world and accidentally imprisoned Dream. The storyline is exciting and fantastic.

We strongly suggest you grab your pack of popcorn this weekend and catch hold of the Sandman Season 1 right now!!!

Read More – Netflix Is Planning The Sandman Spinoff On This Character!!