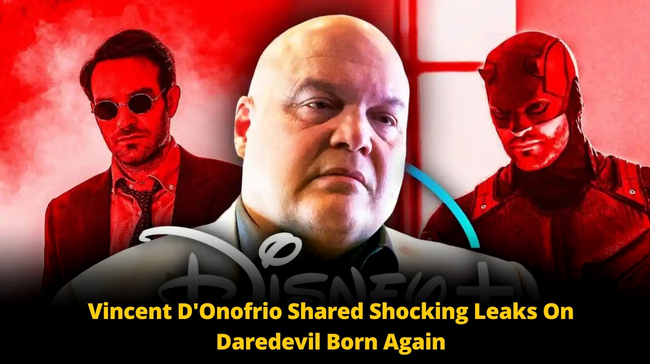 Following this big announcement at Marvel Studios, Hall H at San Diego Vincent tweeted, “When I was a boy,” Which he has said most of the times in his Netflix Daredevil series. After some hours, another tweet came in by Vincent in which he shared Daredevil Born Again’s official logo.

He wrote, “yes, Mr. Murdock.” Marvel’s Daredevil Born Again, starring Charlie Cox and Vincent D’Onofrio, will be streaming in the spring of 2024.

Kingpin is the real king!!

Kingpin first appeared in 1967’s Amazing Spider-Man, created by Stan Lee and John Romita Sr. . Vincent is the third character to be Daredevil.

The first character was John Rhys-Davies, who played the Kingpin role in the 1989 television film The Trial of the Incredible Hulk, in which Rex smith also featured as Daredevil.

And Michael Clarke Duncan was the 2nd character who played the role of Daredevil in 2003’s Affleck-led Daredevil film. Vincent portrays the Kingpin in Netflix’s original Marvel series. Charlie Cox starred as Daredevil, which ran for three seasons from 2015-2018.

The main antagonist of Daredevil season 1 was Vincent. He also served as the second antagonist in season 2 and became the big bad in season 3.

In the late 2021s, Vincent finally reprised his role as Kingpin in Marvels’s studio’ Thus confirming the character in Marvel cinematic universe.

In Hawkeye, The mysterious uncle of Maya Lopez, aka Echo, was revealed to be Kingpin.

In the MCU film Spider-man: No Way Home, Matt Murdock’s role was reprised by Charlie Cox, who served as Peter Parker’s lawyer.

The roles of Vincent and Charlie Cox will reportedly reprise their respective roles in Marvel Studio’s upcoming Disney+ series Echo, a spinoff of Hawkeye, the part of phase 5 of the MCU, which is slated to premiere in 2023 summer.

She-Hulk, a new trailer of Marvel Studio’s Attorney at Law, features a brief cameo by Daredevil, who appears in something new, a Bill Everett-esque suit.

Charlie Cox is confirmed to be voicing the character of Daredevil in the Disney+ animated series Spider-Man: First year.

Marvel gets a Reboot for Daredevil

Besides all of this, the reports of Marvel Studios developing a reboot series of president Kevin Feige confirmed as much at SDCC, Daredevil Born Again debuting in the springs of 2024, which will be a part of the latter portion of the MCU’s phase five.

Charlie Cox and Vincent will appear in the series; the first season will have 18 episodes.

Oh Why Is The Title Daredevil Born Again?

The title Born Again is not just signifying Daredevil’s return to the screen. It also referred to writers Frank Miller and artist David Mazzucchelli’s 1986 comic book Daredevil Born Again, regarded as one of the men without Fear’s defining tales.