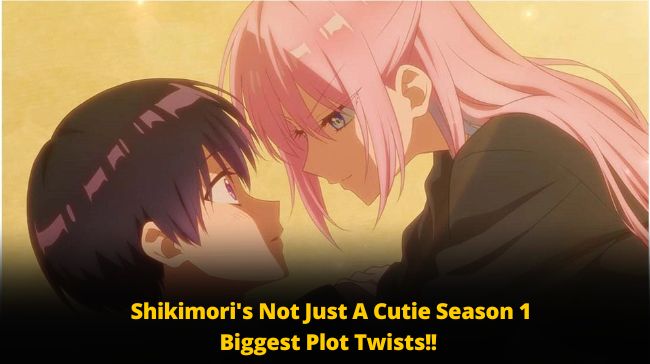 An anime title called Shikimori’s Not Just a Cutie, which was released in Spring 2022, recently reached a satisfying conclusion early in the summer after some delays.

In the Shikimori anime, many unexpected character development twists and moments stood out, which has been truly an adventure to watch with the adaptation unfold, and now we’ve seen the story, we know how delightful it was to watch them all!

Shikimori’s not just a cutie- A conventional fairy tale!

According to most high school rom-com anime standards, Shikimori’s Not Just a Cutie anime is fairly conventional and cautiously trying new things in the genre.

The plot moved forward in a few unexpected ways and revealed intriguing insights about some of the main characters in a few scenes.

Fireworks of love between Izumi and Shikimori

There’s pretty much a cliché in rom-coms about characters attending summer festivals to watch fireworks. Shikimori’s Not Just a Cutie was no exception.

The scene goes like Izumi invited Shikimori to watch from a secluded place that only Izumi’s family knows about, so they could watch the fireworks together.

As Izumi’s parents once did, watching fireworks there is a family tradition, so inviting Shikimori makes sense. Izumi literally tells her, “you’re part of the family now,” expressing the family’s approval of Shikimori being one of them.

There was also a new main cast member who joined the scene during the obligatory school festival sequence named Kamiya, a popular and cool girl.

As much as she’s admired, she’s not really understood by her classmates, so she’s sort of the second Shikimori. Despite feeling guilty about liking another girl’s boyfriend, she boldly accepts having a one-sided crush on Izumi.

As intriguing as the new love triangle twist was, it was soon resolved without too much drama, keeping up with the anime’s wholesome tone. Kamiya graciously lets go of Izumi and develops a strong new friendship with Shikimori after talking things out between them.

During the school sports festival, Izumi’s curse of clumsiness and bad luck spread to other people, much to everyone’s surprise. As it turns out, Izumi didn’t have bad luck at all; it was his friend Hachimitsu who had unnatural clumsiness.

As odd as that was in itself, Hachimitsu decided to go Plus Ultra and finish her leg of the race even though she was exhausted and not interested in running, which became an admirable turn of events for Hachimitsu. In that episode, it was Hachimitsu, of all people, who stole the show.

What are Shikimori’s motives for being cute?

It’s Time to Find out Shikimori’s Motives behind why she was being cute!

It was later in Shikimori’s not just a cutie Season 1 that Shikimori’s mysterious backstory emerged, and flashbacks revealed why Shikimori wants to be Izumi’s perfect girlfriend.

Shikimori always followed her strict mother and older brother Fuji and had no initiative in her youth, making Fuji worry that she had no real identity. Resulting to that, Shikimori dropped her karate hobby, which she gained from Fuji, and reinvented herself.

The transition from Shikimori’s tomboyish antics to being cute and ladylike wasn’t easy. She’s still a bit tomboyish with her physical stunts, and even though that’s fine, she’s still worried about giving the wrong impression.

Is there a scene that best defines Shikimori anime?

Do let us know which is your favorite scene from Shikimori’s not just a cutie Season 1 that gave butterflies to your stomach!