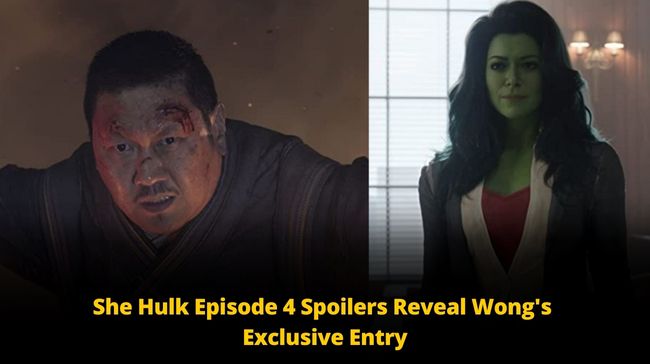 As per the information released by She-Hulk: Attorney at Law creator Jessica Gao, episode 4 will be one of the best episodes of the series.

Currently, the last episode streamed on OTT was episode 2, and fans are curiously waiting for its next episode to show up.

In an interview, Jessica Gao enlightens fans that episode 4 of She-Hulk is something that fans don’t want to miss. She revealed that Wong would appear in the fourth chapter of the series.

She Hulk Episode 4 Spoilers: Why will Wong appear?

If we look into the history of Wong, we will find out that he is one of the important personalities in the Marvel Cinematic Universe.

He entered the MCU with Doctor Strange as a Bookkeeper in Kamar Taj. With a series of incidents, he became the right hand of Doctor Strange (who was Sorcerer Supreme).

However, with the entrance of Thanos and his succession in wiping out the whole universe population by fifty percent, Wong considers himself the Sorcerer Supreme as Doctor Strange was also one of the victims of Thanos.

Even after five years, when everyone was repurchased to life, he retained his title and acted accordingly. Even Dr. Strange respected him as his leader. As per the stories of MCU’s current phase, Wong has been seen in many movies, indicating that he is of prime personality.

His appearance in She Hulk episode 4 has been confirmed, and fans can’t wait to see their most favorite comedian hero on the screen.

She Hulk Episode 4 spoilers say it will be one of the most fan-loving episodes!!

That’s correct; the above statement was passed by none other than Jessica Gao, who is sure that episode 4 of She-Hulk will blow the viewers’ minds. She also throws some light on her entry of Wong.

According to her, the access of Wong always tends to entertain the audience with his humor and also has an essential part in the story.

She further explained that the viewers might find other episodes normal, but chapter 4 will be the most charming one. Discussion among fandom already has taken place, and possibilities of what may happen in episode 4 have taken a spark.

After knowing the multiple disclosures that will happen in episode 4, the horde anxiety is just off the charts.

The story of She-Hulk: Attorney at Law and Bruce Banner seems successful in winning the crowd’s hearts. For more updates, stay tuned, and don’t forget to follow us.