The Marvel franchise is dropping multiple bombs. The year 2021 was loaded with bombastic ventures from the franchise and there are more lined up in 2022. But, the shocking news coming out is the Russo Brothers are gearing up for a comeback in the Marvel Cinematic Universe with Avengers: Secret Wars.
So, fans get ready to witness the same level of excitement as the Infinity Saga. But this time things will be on a large scale. Therefore, everything will be grander.
Joe and Anthony Russo have turned out to be two of the biggest names in the world of entertainment. With their insane direction skills, they delivered a dream come true project to the fans. With the Marvel franchise, they offered the fans the ultimate world of entertainment with 22 movies and wrapped up the show with Avengers: Infinity War and Endgame.
While the movies were loosely based on the Infinity Saga hailing from the comics, the magical touch of the Russo brothers took it to another level. However, after Endgame, the fans were missing the magic of the Russo Brothers and the good news is they are not done yet.
As per the latest updates from reliable sources, it’s confirmed that the Russo Brothers mcu will be back on the rampage with Avengers: Secret Wars. Recently, after Spiderman: No Way Home’s release, the social media was flooded with tweets questioning the franchise that will the Russo brothers make a comeback in the seats of the directors in an upcoming movie?
If you are one with the same question, make sure to read the complete article as we have collected some fresh news directly from the creators. 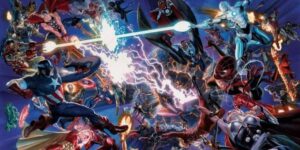 Recently, Joe Russo attended the world premiere of Spiderman: No Way Home. While the movie went incredibly popular, the media turned the limelight towards Joe storming him with questions on his return to the MCU world.
He was stopped on the red carpet and interviewed about the same topic. To all the questions of the media on his comeback with Avengers: Secret Wars, Joe answered, “What can I say? Look, we really love those guys out there.
You know I can’t say one way or the other, but I would work with them in a heartbeat. It’s the best working experience in my entire career. They are now like my family and we love them, the fans and the materials.”
While his answers appeared to be manipulative, in the latter part of the interview, he teased the return of the Russo Brothers with Avengers: Secret Wars. He said, “One of these days. We will have to watch how all this shakes out. I even don’t know what they are going to do with all those characters out there.”
So, though their statements are not clear, sources suggest that the Russo Brothers will surely make a comeback with Avengers: Secret War. The list of heroes included in the movie will be the Avengers and the four precious members of the Fantastic Four. While the movie may also include Spiderman and Spiderwoman. X-Men and his team may also board in.
As there are multiple versions of the secret wars as per the comics, it is pretty difficult to predict the storyline. But, with the Russo brothers taking the seat of the pilot, we will surely experience a roller coaster ride of thrill and action.
Make sure to follow us for more amazing content. Bookmark our page as we will be the first to share fresh news on Marvel Cinematic Universe to your doorsteps.