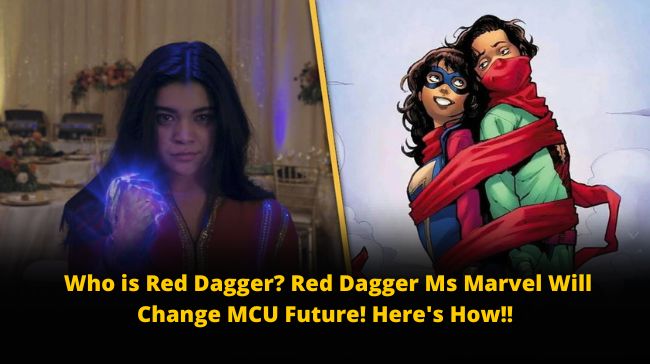 Ms. Marvel is on a roll; her series has been one of the most exciting series this year. So how did this happen?

Loaded with twists and turns, the series has hit the hearts of the fans.  With several characters, the Ms Marvel series impressed the viewers. Moreover, with every episode, it explores the depths of the story by introducing new faces. In the latest episode, one name that popped out is Red Dagger Ms Marvel.

So, who is Red Dagger? Why is he essential to Ms. Marvel? Our article will explain to you all about Red Dagger Ms Marvel.

Who is Red Dagger?

As the newest & youngest superhero, Ms. Marvel is now becoming one of the most loved characters in the MCU.

Since the release of its first episode, MCU has been busy unfolding a new character every week with each episode.

And now, with the release of episode 4, they have introduced a new clan of warriors known as the Red Dagger Ms Marvel.

On a trip to her ancestral home in Pakistan, Kamala encounters the secrets of how and why her family developed magical superpowers. And there she meets the Red Dagger- Kareem. Kareem attacks Kamala but later on discovers that she is the Great Granddaughter of Aisha. Kareem introduces Kamala to his secret society of Red Daggers & Waleed. Waleed is the leader of the Red Daggers, a group of people with an aim to protect the world from unseen dangers. Waleed tells Kamala more about the Clandestine and their origin as beings from a “parallel dimension.”

With the death of Waleed in the fourth episode, now the story of Ms. Marvel focuses only on one particular member of Red Dagger, which is Kareem (Aramis knight). Though we all have seen Kareem fighting Kamala (Ms. Marvel) in his first episode, we are still sure he will serve as Kamala’s sidekick. In the coming episodes.

Who is Red Dagger in the Marvel Comic Universe?

In the Marvel comic books, Ms. Marvel (Kamala Khan) went to Karachi, Pakistan, to visit her family’s home on a break from living as a superheroine in New Jersey. While there, she met the Red Dagger (real name Kareem).

In the comics, Kareem isn’t a secret society member.

Instead, he admits that he is an entirely self-taught vigilante who learned most of his best moves by watching YouTube videos. While in New Jersey, Sparks flew between Ms. Marvel and the Red Dagger, resulting in Kareem becoming Kamala’s first kiss. Still, shortly after, Kamala realizes that she had a lot to sort out in her home life with her best friend and sorta-crush Bruno, so instead, she took a bow.

While many things are very similar to the comics, Ms. Marvel, the MCU series, is doing something new and original with those aspects.

As for the TV series, Ms. Marvel is approaching its final episodes, and it’s unknown if the series will continue with a second season.

Hopefully, this article helped clarify some lingering questions about who Red Dagger is & his role in Ms. Marvel.