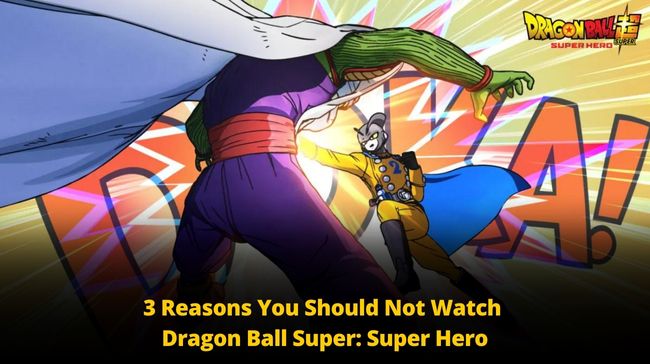 Finally, the long long wait of the true Dragon Ball fans is over as the latest DBS movie has landed in theaters, worldwide. After the Cell games arc, Gohan has finally stepped into the shoes of the main protagonist, while Goku & Vegeta are having a good time training on Beerus’ planet.

The movie has been one of the most hyped projects and it’s rated the best till date from the franchise. Though the movie has a bunch of positive points there are a few reasons to avoid it. So, here are some of the major reasons to skip Dragon Ball Super: Super Hero –

Hands down! Dragon Ball Super: Super Hero is one of the best projects from the franchise. The movie has every piece of entertainment required to satisfy the burning desires of anime lovers. However, if you are walking into the theaters with some unusual expectations you may be heartbroken. So, here are the reasons you should skip the movie –

If you are a Goku and Vegeta fan who is jumping into the theaters to see the heroes back in action, you may be disappointed. Both the characters have a minimum screen presence as their battle goes on off-screen. However, there is good news for Vegeta fans as after years of unsuccessful attempts, the Prince has finally defeated Kakarot in a pure 1v1 martial arts battle.

No Back Story Of Gohan’s New Form

Though we know rage and pain have been one of the biggest triggers for the Saiyans to unlock new forms, the backstory of Gohan’s new abilities is still under the wraps. While Dragon Ball Super: Super Hero initially presents Gohan as a Saiyan who has given up his training, in the end, Gohan reveals he has been training secretly. However, there has been no explanation of where or how Gohan trained to achieve so much power and why was he hiding that from Piccolo.

Moreover, Dragon Ball Super: Super Hero only passes a glimpse of Gohan’s dormant potential. The true abilities of the Saiyan are still under wraps.

Mixed Reactions On The Animation Style

The franchise has no doubt tried to enhance the animation to give a realistic view and they are successful to a certain extent. However, the fans who like the old animation style like in Dragon Ball Z or Dragon Ball Super will get a sudden shock and may dislike the chance. So, make sure to take a brief look at the trailer before diving into the theaters.

Dragon Ball Super: Super Hero is one of the brilliant works from the franchise and we will definitely recommend all anime lovers to watch it in the nearest theaters. In this article, we just tried to point out some negative points which are negligible in comparison to the positive. So, definitely share your views on the movie!! Happy watching!!