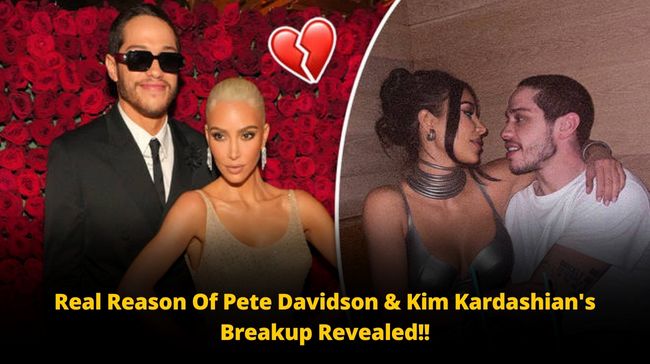 We are all broken by this news… and we are here to share it with you!!! Pete Davidson and Kim Kardashian break up news stormed the internet! But why did the couple choose to part ways? Here is all we know…

The fans have been wondering what led to this shocking Pete Davidson and Kim Kardashian break up???

The couple has been very much into each other for the last 13 months, and the recent development in their relationship has sent shock waves to their fan community!!

The news of this saddening split was revealed by a source that confirmed Page six of the same.

Sources believe that the reason supporting this decision by the couple was the exhausting schedules that made it difficult for both of them – Pete Davidson and Kim Kardashian, to blossom in their romantic relationship.

It is assumed that the age difference here is also playing a significant barrier. The difference of more than a decade is one of the reasons for the fall of this relationship.

Also, the work commitments and different personalities sum up their split.

After nine months of dating, Pete Davidson and Kim Kardashian are now parting ways and have decided to remain friends. The insider shared that they hold immense love and respect for each other but found it challenging to maintain a relationship.

The Saturday Night Live star is currently shooting for a movie in Australia, while Kim, as we all know, is based in Calabasas, California, along with her four children. It is difficult for her to keep up with the pace of this relationship, and she is too exhausted to take this further.

Amongst Pete Davidson and Kim Kardashian, Pete is a 28-year-young blooded man, while Kim is 41 and a mother to four gorgeous kids: North, Saint, Chicago, and Psalm from her ex-husband, Kanye West. Kim filed a divorce from Kayne in February 2019.

Pete being the spontaneous one, expects Kim to fly to New York or wherever he is at a moment’s notice. While this is getting too exhausting for Kim, a mother, she cannot leave her children with such short information.

Also, she has her business schedules lined up like Skims, KKW Beauty, KKW Fragrance, and SKIN. With kids and workarounds, such a spontaneous relationship takes too much of Kim.

So Pete Davidson and Kim Kardashian had fallen deeply in love and wished to spend the rest of their lives together, but it did not work out as planned.

The age difference, shoot schedules, long distance between them, and also different personalities have proved to be a barrier to their future.

Kim still feels that Pete is one of the sweetest guys she has ever met, but a lot ahead is not visible now.

We wish them both a great life ahead!