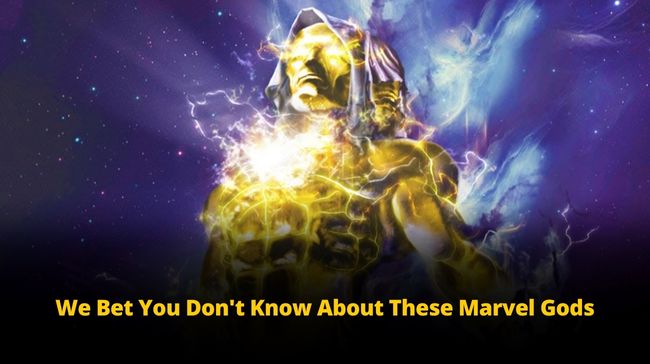 There are many powerful Marvel Gods, but today we are sharing with you our list of top 5 Marvel Gods you don’t even know about.

There is so much in common between Eternity and Infinity as Death does with Oblivion; each provides a unique cosmic power.

There’s an exciting story of Death, of falling in love with certain mortals. One romance involved Deadpool; he was made immortal as a punishment to keep him away forever from his Death.

An incarnation of destruction, Abarax is a rival for Eternity as Oblivion does for Infinity.

The First Firmament is the embodiment of the first-ever universe to exist. The creator of Aspirants and the Celestials is First Firmament, but after a powerful cosmic attacked him, he was barely alive. However, he survived the ordeal; The First Firmament watched as his essence, which was scattered, became the Multiverse and went through multiple renewal cycles.

Upon the rebirth of the eighth iteration, the First Firmament attacked Eternity, the current embodiment of the Multiverse.

Lord Chaos, The fusion of Master Order and the In-Betweener, Logos is a mighty cosmic being and is the agent of the First Firmament.

Perhaps the biggest claim to fame is seemingly destroying the Living Tribunal, though whether he can permanently die remains unclear.

The Living Tribunal. He isn’t just the second powerful god, he has second-in-command of the most potent force in existence, and the Living Tribunal rarely intervenes in Moral matters, but he has to do it sometimes to preserve balance.

He has been stated as exceeding beings like Eternity in power and represents an even more elusive entity who dwarfs him more in strength….

One Above All, the one who created all universes and beings, is a powerful god. He rarely directly manifests; the Living Tribunal is the one with whom One Above all conveys his will. All this is presented as a caring albeit alien force that once appeared before Peter Parker to restore his faith in humanity.

While typically portrayed as a benevolent deity, One Above All can appear as the “One Below All,” showcasing a destructive side when the need arises. Some fans interpret him as the avatar of real-world Marvel icons Stan Lee or Jack Kirby, while others prefer to think of him as the Marvel universe’s creator.

Marvel is a universe in its own… the fans of Marvel Cinematic Universe are insanely in love with the franchise and all of its superheroes and gods.

We have hereby shared with you our list of the top 5 Marvel Gods. Marvel has a lot of cards that shall be coming on the screen in the coming time!! And we are excitedly

Read More – Who Has The Rights To Knull – Sony Or Marvel? Will He Enter MCU?