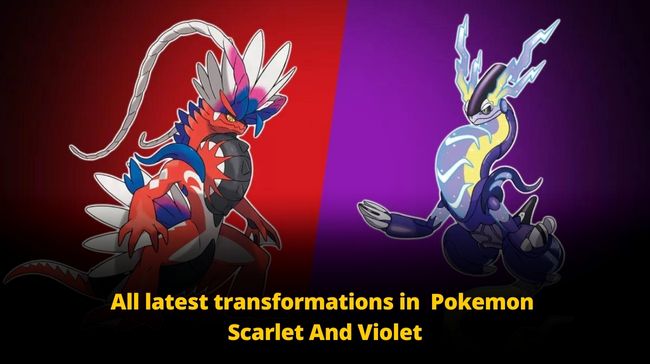 Keep aside your work, get a cup of cappuccino, dress up in your comfiest pajamas and ah wear them on your quilts and then read what we have to share with you today because we know you want to be the first one to read about Pokemon Scarlet and Violet‘s new trailer: Ah, are we right?

For the Non-Pokémon Lovers, we want to give you a glimpse of Pokemon Scarlet and Violet!!

Don’t you think there was a time when there was no Netflix, Hotstar, Amazon, and so on, and all we had was just the TV and the anime series? Pokémon has been every child to teenager youngster’s favorite for obvious reasons. They’re the upcoming 2022 role-playing video games developed by Game Freak and published by Nintendo and The Pokémon Company for the Nintendo Switch!

After all, what’s the difference between Pokemon Scarlet and Violet?

In Pokémon Scarlet, your professor is a woman called Sada, who has an oh-so-amazing outfit that depicts more primitive times.

But, on the other side, in Violet, your professor is a man named Turo (we like the name, though), who has a more futuristic style of wardrobe. Let us tell you, peeps if you can decide with just these, more power to you!

Also, what say, is Pokémon Violet and Scarlet the same game?

By the way, Pokémon Scarlet and Violet are the first installments of the ninth generation of the Pokémon video game series, announced at the beginning of 2022. As with previous generations, these are the two versions of the oh-so-same game! Well, it looks like now it’s getting harder to wait after the Pokémon Violet and Scarlet trailer!

Any guesses, what Pokémons are in Pokemon Scarlet and Violet?

Ah, let us guess. But why even waste time guessing? It has Altaria, Bagon, Cacnea, Blissey, Bounsweet, Azumarill, and so on!

Pokémon Violet is said to be beating Scarlet in the popularity race! Also, there are around 78 confirmed Pokémon for Pokémon Scarlet and Violet. Eight new Pokémon have been revealed, including the new starters!

The Pokémon Scarlet and Violet trailer have so much to say: Ah!

The trailer revealed the region’s name and battle gimmick, too. Not much of new monsters were revealed, though. The new trailer only included two new species and a regional form. Our eyes were wide open when we saw the Pokemon who were revealed.

They were Paldean Wooper, Fidough, Cetitian, and Fairy Type Puppy! There are chances of Paldean Wooper’s possible role in Gen 9! We can’t wait to watch Pokémon Scarlet and Violet’s Cetitan and its possible evolution!

Comment whether you loved the Pokémon Scarlet and Violet Tracker. Stay tuned, and don’t forget to follow us, guys! Sayonara!