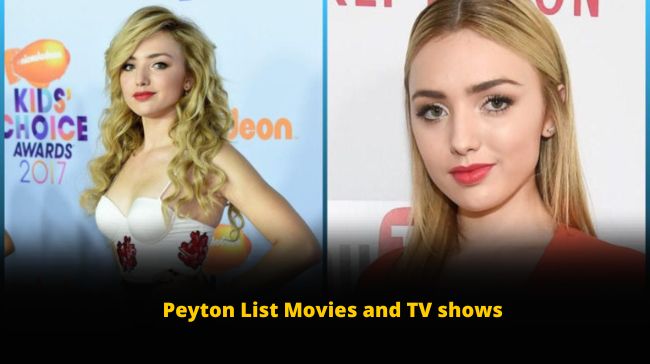 Are you a fan of Peyton List and are looking for some Peyton List Movies and TV shows to enjoy this weekend? Then worry not, as here in this article we will talk about some of the best works of Peyton List that you’ll surely enjoy.

Peyton List has grown to fame for her works in the Hollywood industry including movies like Aileen Wuornos: American Boogeywoman, Diary of a Wimpy Kid, The Thinning, etc. In this article, we will discuss some of Peyton List Movies and TV shows. Before we talk about some Peyton List Movies and TV shows, let’s know a little bit about the actress herself.

Peyton List is a twenty-four-year-old American actress and model. Her career started from a very young age as she was a child model and modeled for children and tween magazines and companies.

Peyton made her debut in Hollywood with the movie 27 Dresses and rose to fame for her portrayal of Holly Hills in the 2010 movie Diary Of A Wimpy Kid.

Peyton List appeared as Tory in the spin-off series of Karate Kid in 2019 and received positive praise from social media.

Peyton is also a recording artist who has released her singles named “Liar Liar”, “Dance Till We Die” and a music video of her song “Don’t Cry” which was released by Billboard exclusively.

Now to end your quest to find praised works of Peyton List, here is a list of Peyton List Movies and TV shows that we think were among her best works.

The Thinning is a movie that tells the story set in a dystopian future where the population of earth is controlled by a suitability test held in schools. However, two students named Blake Redding (played by Logan Paul) and Ellie Harper (played by Lia Marie Johnson) find out that the test system is rigged and is hiding a larger conspiracy. In the movie, Peyton List was seen in the role of Laina Michaels.

Based on Jeff Kinney’s novel of the same name, Diary Of A Wimpy Kid is a cheerful movie about an 11-year-old named Greg Heffley, who is all set to start middle school and is hopeful about being popular among the school students. However, things take a funny turn as his goal to become popular starts coming from him being in hilarious situations. Peyton List appeared in the role of Holly Hills in the movie.

27 Dresses tells the story of Jane Nichols, who after serving as a bridesmaid for 27 times is shocked to see her younger sister get engaged to the man she loves. However, while all this is going on, she meets a cynical journalist named Kevin Doyle. In the movie, Peyton appeared as Jane Nichols. This was also Peyton’s

Swimming For Gold is a 2020 movie starring Peyton List as Claire Carpenter, who is an Olympic swimmer with big dreams. However, her dreams and hopes are shattered as she experiences an accident which causes her to give up on all of her hopes and dreams and help the Australian men’s swim team.

Bunk’d is a 2015 sitcom TV show with six seasons that tells the story of Emma, Ravi, and Zuri who go on an adventure at a summer camp in Maine, where their parents had met each other for the first time. The series has a total of 111 episodes and was released on 31st July 2015. In the show, Peyton was seen in the role of Emma Ross.

Cobra Kai is a 2018 comedy-drama series with a total of 4 seasons which tells the events of thirty-four years after the events of the 1984 All Valley Karate Tournament. Johnny Lawrence, the protagonist of the show, seeks redemption by reopening Cobra Kai Dojo and prepares to face his rival Daniel LaRusso. Peyton List appeared as Tory Nichols in the show.

Light As A Feather is a 2018 thriller series with a total of 2 seasons that tells the story of four best friends on Halloween who decide to invite the new shy girl into town. But their decision starts to seem questionable when the new girl proposes to play a game called Light as a feather, and the seemingly innocent game takes a dark turn. In the show, Peyton List is seen as Olivia Richmond.

Here in this article, we have talked about some Peyton List Movies and TV shows. Which one of these did you like the most? Let us know in the comments below.

Read More – Where Else You Might Have Seen Isabel May Before?