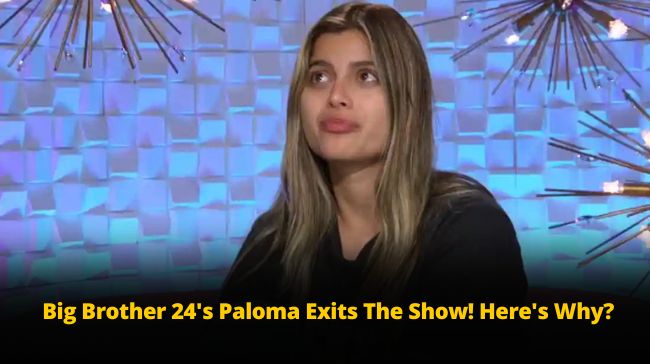 The talk of the town reality television series Big Brother aired its twenty-fourth season which premiered on July 6, 2022. The show can be viewed on CBS in the United States and Global in Canada.

The shocking news about the show is the exit of Paloma Aguilar, the contestant of Big Brother” Season 24 before the first live eviction was scheduled.

So, why did she leave the show? Here is all we know about Paloma Big Brother!!

Why Did Paloma Big Brother 24’s Contestant Exit The Show?

Palona Big Brother Season 24’s contestant revealed that she had sleepless nights and was struggling with anxiety.

Paloma’s lack of sleep took over her only twenty-five minutes inside the house. She told Matt Turner that she physically could not sleep and wished to leave the house.

The housemates started worrying about her well-being, looking at her condition. Then Big Brother’s Paloma suddenly disappeared into the Diary Room, which raised the concern of the housemates.

The Exit of Paloma from Big Brother

On Thursday night’s live episode, the Head of Household Daniel Durston asked everyone to gather in the living room to read a note from the production. The message read,”Due to a personal matter, Paloma will no longer be continuing in the ‘Big Brother’ game,” he read to the other houseguests. “She wanted to pass along that she loves you all and wishes you all the best.”

Host Julie Chen Moonves shared on the show how this unexpected turn of events with the exit of contestant Paloma of Big Brother has now changed everything.

She also informed the house how originally, the nominees Taylor Hale and Terrence Higgins were to compete against the three “Backstage Pass” holders, and the one who lost would go home. But as a contestant, Paloma of Big Brother has already left the show, so no one would be going home this week.

We all have witnessed contestant Hale being the cast’s target since the new season began.

The exit of Paloma Big Brother 24’s contestant along with other housemates, was already facing negative comments from social media regarding the remarks made for the Black housemate Taylor Hale.

Hale is a 27-year-old personal stylist from Detroit who was the target of multiple microaggressions by the housemates. Many of these were led by contestant Paloma of Big Brother in a campaign to get Hale evicted. The housemates slashed her for being aggressive and losing her temper while being nominated.

Though the producers had confirmed that the entire cast had been through sensitivity training before the show began.

As big die-hard fans of BB, we expect the non-occurrence of such incidents in the future!

Read More – Ryan Gosling Reveals His Dream MCU Role!! We Bet This Will Shock You!!