A bunch of Netflix’s Ozark characters have actually worked in different Marvel ventures. Though they are in disguise in Netflix’s hit series, if you are a marvel fan, we know some of them seemed familiar to you. So, Sassyshows is here with the list of Marvel actors included in the Ozark Characters.

Since its release in 2017, Netflix’s grim criminal drama “Ozark” has become one of the most talked-about and binge-worthy shows. It’s difficult to deny that this is one of Netflix’s best-known original programs.

Some may even argue that it concluded its run as one of the finest television shows ever. The “Ozark” fanbase will undoubtedly miss the exploits of launderer extraordinaire Marty Byrde (Jason Bateman) and his downtrodden family now that the show’s pulse-pounding four-season run has come to an end.

While many will mourn Marty’s notoriously calm manner under duress, they will equally miss the antics of his many distinguished co-stars. You might not realize it, but several members of the Ozark cast previously worked with Netflix on Marvel programs before they were re-released on Disney+.

Yes, that list is probably longer than you think. The Ozark characters who have also landed parts in Marvel films are listed below. Tom Pelphrey joined the Ozark cast during the third season of the show. He did it in the role of Ben Davis, Wendy Byrde’s kind but troubled brother (Laura Linney).

Most “Ozark” fans will agree that Ben is essentially a human tornado that ravages the “Ozark” terrain for the whole of Season 3.

However, the second season of “Iron Fist” tells a different narrative, with Pelphrey helping to smooth out Ward’s rough edges and turn him into a delightfully flawed, three-dimensional character — someone we wish he’d had more time to portray.

Janet McTeer and Lisa Emery weren’t the only “Jessica Jones” extras cast on “Ozark,” as Jessica Frances Dukes also appeared in the third season of the Marvel series.

In Seasons 3 and 4 of “Ozark,” Dukes plays the feisty FBI Agent Maya Miller. In “Jessica Jones,” Dukes plays Grace, the co-host of such shopping channel program Trish Walker (Rachael Taylor), during Season 3. Grace has a small part in an overcrowded “Jessica Jones” season.

Lisa Emery has the distinct privilege of representing one of the “Ozark’s” least lovable characters. Her performance as Darlene Snell, though, was a genuine series highlight, and she turned out to be one of the important Ozark characters.

The show also served as a true breakout for Emery, who had previously thrived in minor supporting parts and one-off media appearances.

Read This Also : Who Is Richard Thomas Ozark Season 4? Here Is Everything We Know

The story of little Jonah (Skylar Gaertner) was one of the most stressful and, in the end, unexpectedly satisfying for all the Byrde family and friends on “Ozark.”

Regardless of how you felt about Jonah’s gun-toting, parent-hating adolescence, we agree that Gaertner sold each second of the action like a pro. 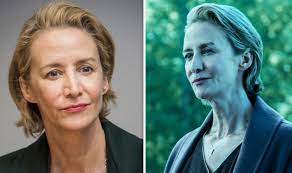 Several cast members from Marvel’s “Jessica Jones” are entangled in the cartel-addled carnage of “Ozark,” suggesting that the casting directors were also fans of the latter.

Janet McTeer, who played the icily dominant cartel attorney Helen Pierce for the second season of “Ozark” before, you know, everything happened, is one of them.

It also set the super-powered mom and daughter on a meeting path, heightening the drama of a season that was already fraught. Yes, McTeer’s appearance in the series was as intimidating as her fictional daughter.

Did we miss someone? Do you know any other Ozark characters who are Marvel actors? Tell us in the comment box.