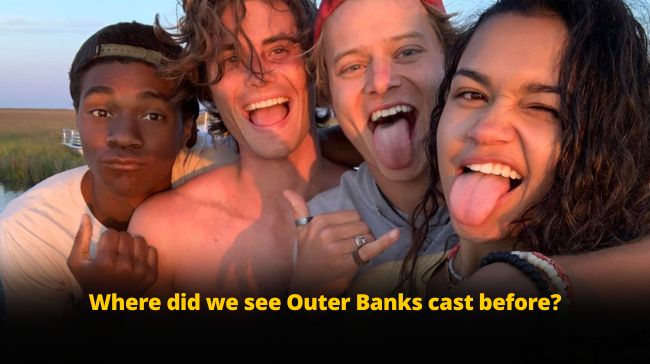 Outer Banks, the teen mystery-drama series, became popular among its target demographic due to its central mystique and sunny locales, making it a heavily binge-able series.

Because of that fact, it’s no surprise that the service decided to renew the show for another season before it comes to Netflix sometime in early 2020.

But before we know more about this new series’ setting, which also happens to be one of its main discussion points, here are a few things you should probably know about: the Outer Bank casts previous performances.

In this article, we will highlight previous movies and series that the Outer Banks cast has worked on before joining the show.

Where Did We See The Outer Banks Cast Before?

Chase Stokes as John B

John B., as played by Chase Stokes, is the male lead in Netflix’s popular teen drama series, Outer Banks.

Besides this project, Stokes has also appeared in an episode of the TV series Stranger Things. He has appeared in numerous television programs, including Tell Me Your Secrets, The First, Daytime Divas, and Base & starred in the adventure drama film Between Waves, the short film Lost Island and the TV movie The Beach House. He also appears in Kygo (feat. Donna Summer)’s “Hot Stuff” music video.

Madelyn Cline has been acting since she was just a young girl. She started by working on commercials for Sunny Delight and T-Mobile.

Then she went on to do minor roles in movies such as The Vampire Diaries spin-off The Originals.

However, the similarities between Cline’s and Stokes’ resumes don’t end here because Cline also appeared in two episodes of the Netflix show Stranger Things playing the role of Tina. The latter was a famous friend of Steve Harrington’s (boyfriend of Nancy Wheeler).

In the role of Sarah Cameron, the affluent teenage girl deemed “the princess of the Kooks,” Madelyn Cline plays the female lead character in Outer Banks.

Before her leading role, Cline was notably seen in Stranger Things and Boy Erased as well as episodes of Vice Principals.

She also appeared in Maid to Order, The Originals, and movies like Savannah Sunrise and 23rd Psalm: Redemption. Cline had film roles in The Giant, which, when it premiered at film festivals last year, made its way to VOD in mid-November.

In the role of Pope, who is considered the brains behind The Pogues, Jonathan Daviss plays the most headstrong character at the core of Outer Banks. He is one of the most important parts of the Outer Banks cast.

As a young actor, Daviss’s first screen credit came from an episode of NBC’s Revolution. Later on, Daviss played roles in films such as “Age of Summer,” “Edge of the World,” “Shattered Memories,” and “Deliverance Creek.” In 2017, David played the lead role in the short film All The Marbles. Following that, he will appear in a series called Baselines.

This article focused on the Outerbanks cast & their previous appearances. We hope you liked our article & find it helpful. For more such articles, stay tuned & let us know about your favorite Outer Banks cast member in the comment below.