One Punch Man Saitama Can Defeat These Dragon Ball Characters...

How have you been? Amid rains and tedious work days, here we bring you some trending news for anime fans. Any guesses about what today is all about? Ah, yes, we know, you’ll love it so much! It’s none other than One Punch Man Saitama: The most beloved character!

Something about One Punch Man

This is the Japanese manga series One Punch Man which contains several oh-so-fictional characters created by none other than One and illustrated by Yusuke Murata.

The series follows a superhero named Saitama and his disciple Genos, who joined the incredible Hero Association, so they can be recognized as such when they fight various monsters and powerful demonic villains!

Saitama is the main protagonist of the series and the titular One-Punch Man, too. Trust us, peeps; he’s the most powerful and incredible being to exist in the series!

After all, what’s the true power of One Punch Man Saitama?

Saitama can end any fight with literally one mighty punch, making all the oh-so-struggles that heroes typically go through completely meaningless. But yeah, let us tell you, he struggles with everyday problems like money, loss of hair, and so on—But yes, his one punch can still make you fall in love with him more!

Ever wondered why One Punch Man Saitama is a hero? 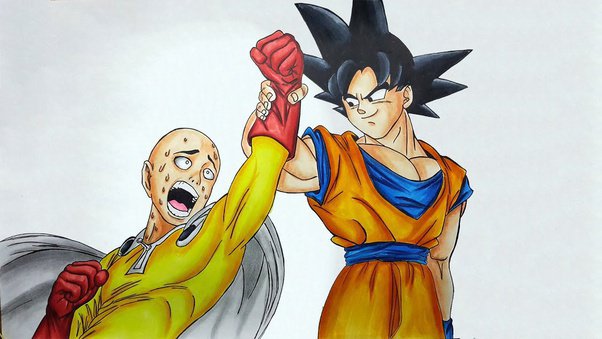 Hero? We should rather say he’s the best superhero. Saitama can end any fight or argument with just one punch. He’s an unassociated hero who hails from City Z and can perform heroic deeds like his hobby. He has trained himself to the point of being able to defeat any enemy with his powerful punch. Ah, but it also looks like his unmatched strength has left him with an overwhelming sense of boredom!

Did you know someone can defeat One Punch Man Saitama, but who’s he?

Baraggan Louisenbairn, who’s one of the primary antagonists of the oh-so-famous anime, Bleach! He’s also Arrancer of the Aizen’s army, and his immense spiritual powers can easily defeat the superhero Saitama! One of the deadliest abilities he can use against the powerful Saitama is Senescencia, by which he can slow the time near him—wooh, isn’t that amazing?

But, what is One Punch Man Saitama’s weakness?

No matter what the outcome is, Garou has concluded that Saitama’s only weakness is his lack of technique and training in martial arts. Oh, not to forget, the most loved anime superhero is terrible at playing video games, too!

Dragonball Characters who One Punch Man Saitama can easily defeat

From legendary Hitman Hit to Jiren to Broly to Kefla to Toppo: Yes, peeps, he can defeat them all with his super magical powerful punch, but there still exist few characters like Zeno, Grand Priest, and others who still can’t be defeated by him.

Comment below on whom you want the One Punch Man Saitama to defeat first. Don’t forget to follow us!