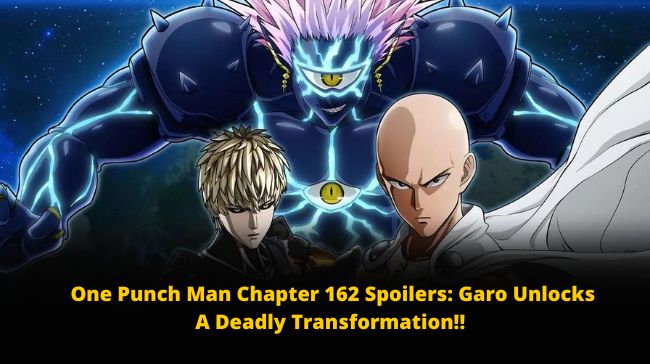 One Punch Man Is Ruling The Anime World!!

One Punch Man is a Japanese manga series that has created a buzz on social media and anime forums. And in television, there have only been two seasons. Additionally, One Punch Man’s manga is still being published.

The release of One Punch Man Chapter 162 a few weeks ago confused the fans by introducing significant changes.

In the recent chapter, we saw Garo’s new godly transformation. Also, he is stronger than before. And that’s what made them more confused.

However, it recently received another publication in which Saitama was getting bored with Garo’s behavior, let the villain understand his weakness, and then forced him to sit down for what seemed to be a heart-to-heart conversation. So, what’s actually happening? Here are some One Punch Man Chapter 162 spoilers.

At the start of the chapter, we see the fight between Saitama, and Garo continues. As we saw in chapter 161, Garo made numerous attempts and used all of his power to try and beat Saitama, but he was unable.

With his new transformation, Garo tries to beat up Saitama, but he breaks his hand when he hits Saitama in the head. Sitama, on the other hand, is rigid and has a blank expression on his face.

He tries to talk to Garo at the same moment, but Garo moves to punch Saitama instead, which causes Saitama to punch back and then add, “Listen to me when I’m talking.”

Then, as we can see, Tareo makes an effort to get to Garo since, in his eyes, the uncle is the one who protects him from danger. Whether Garo is the one or not, Tareo is amused as he watches his transformation. After watching Tareo, Garo asks if he is still alive.

Additionally, Tareo confirms that yes you are the uncle. He was claiming that this time he wouldn’t leave since he had discovered his uncle, who in his eyes had always been the hero. This is the fourth time you’ve saved me, Tareo replied, responding to Garo’s denial that he is any kind of hero. He was able to say how he felt about Garo and added, “Please don’t act like a monster”.

At that point, Saitama interrupts them and asks Garo if he is the one who hunts heroes and is now acting like the monster and also the one who makes kids cry. In the end, Saitama decides to stop Garo from being a monster.

So, what do you think about the new chapter? Follow us for more One Punch Man Chapter 162 spoilers.

Read More:- Goku Vs Saitama (One Punch Man) who would win?