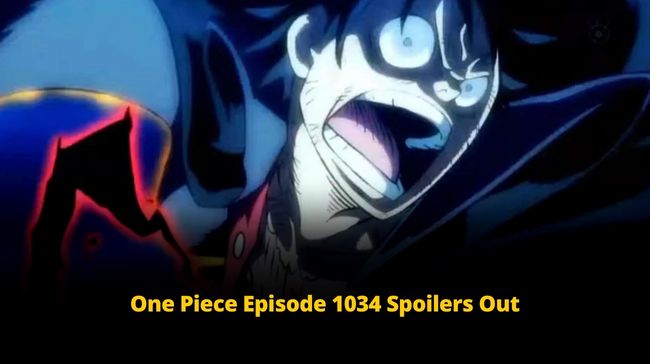 Finally, the wait is over!!! One Piece Episode 1034 is out now, and it just happened a few hours back!!!! The release of this new adventure was much awaited by the fans!! So, we are here with some amazing One Piece episode 1034 spoilers.

Last week’s episode showcased how Luffy wielded his Advanced Conqueror Haki in his battle on the edge of Onigashima with Kaido.

Slowly but surely, the forces of Kaido started to overpower the Straw Hat Pirates. As their leader succumbed to his exhaustion, our heroes were left alone without their leader to guide them. Kaido indeed held the more decisive edge of the battle!! That saddens us.

Warning: One Piece Episode 1034 Spoilers Ahead

The title of One Piece Episode 1034 very much depicts the story – Luffy Defeated! The Straw Hats in Jeopardy?! The episode focuses on Nami trying to save Zeus from Big Mom while her other friends continue fighting with Kaido’s forces.

Let us read further to know more about One Piece Episode 1034 spoilers!!!

One Piece Episode 1034 Spoilers – All About Big Mom’s Cruelty The episode started with Kaido looking at Luffy as we all too see him falling from Onigashima.

The Emperor is seen complaining and cribbing about the performance of Straw Hat Pirates and how poorly they handled the Advanced Conqueror Haki.

The Emperor also mocks the name of his attacks, while Luffy is drowning after hitting the water, and Kaido turns around. He fakes that the young pirate Luffy has ended up and,

As Big Mom announces to Zeus that he is no longer a member of her crew, the cloud-like Homie begins crying in disbelief at the top of his voice; He thinks that his creator is just joking.

But Big Mom stays calm even as her other creations start mocking and insulting Zeus, as he knows that she will make Hera eat Zeus and augment her power.

Sharing a few more One Piece Episode 1034 spoilers with you.

Yamato is running through Onigashima with the doll version of Momonosuke that he created. The young man defeats his dad’s men in seconds as he finds them in his way.

After defeating all the fighters, he shouts in his extreme voice that his name is Oden and he will protect Momonosuke.

As this episode 1034 returns to Nami, Usopp, and Otama, the trio is sad as Hera is seen continuing to absorb Zeus’s soul. As the female Homie eats up her sibling, she becomes more energized. This is what pleased Big Mom immensely.

Now that Otama realized there was nothing they could do, he took Usopp’s hand and told him to keep going.

So fans, we are incredibly excited to release the next episode, and by then, we will satisfy ourselves with One Piece Episode 1034 spoilers. Stay with us for more such updates!!!!