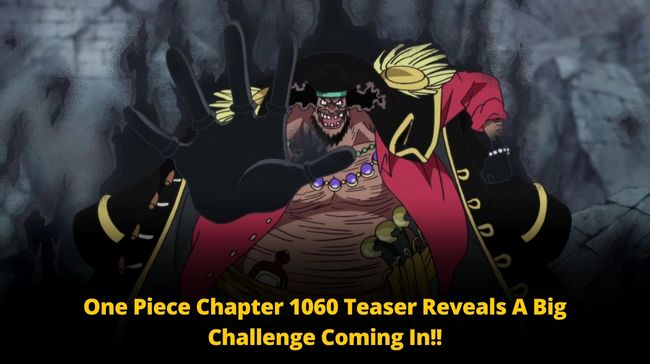 We are all going bonkers about the One Piece Chapter 1060 teaser – a preview in the still unreleased chapter 1059.

The hints point toward a new challenge our favorite Straw Hats might have to face now!! Read ahead to learn more about One Piece Chapter 1060 teaser revelation!

The available leaks and One Piece Chapter 1060 teaser give us an idea that the Straw Hat crew might face a new threat soon after the end of the Wano arc.

Now that they have set back for sail, the journey might be getting more adventurous for the team Straw Hats.

Kaido’s defeat has resulted in the mainland going into a big mess. Our pirates are now routing the mainland and might face this chaos soon!

The Author’s note that was accessible to the fans gave the first hint to them! Now the fans are aware that the Straw Hat crew will be encountering a new challenge that is up their way.

This note was available in the full scans of chapter 1059, which is yet to be released. This warning given by the Author clearly states that the world is in a big mess and facing constant turbulence since the Wano Arc events.

Thus Luffy and his team will soon be facing an unknown enemy, about whom we are yet unaware!

The thought to ponder upon is that the world is in turmoil. What path will Luffy and his team take???

Author’s Note – Not the first time!

It was not the first time the Author had come up with a note in the franchise! Earlier it happened for Chapter 1058 as well!

Earlier, the message was accompanied by the image of Luffy in his Gear V mode. This transformation was used earlier when they were up against Kaido. This time the crew might face a similar threat!

What to expect from One Piece Chapter 1060?

The One Piece Chapter 1060 teaser from the still unreleased chapter 1059 would give us significant hints for chapter 1060.

The soon-to-be-released chapter 1059 will inform us where the Author is heading with his much-loved manga series.

As we all know, Blackbeard might soon be proving himself as a significant threat to the world. He is on a constant hunt for the Devil Fruits, and his intentions are crueler than expected.

He is not shying away from kidnapping Koby, despite knowing that Marines are going after him for it! This is definitely a clue clarifying a possible tiff between Luffy and Blackbeard, along with their crews!

The fans are now excited and keep guessing clues from wherever and whenever possible!

As we are yet to wait for possibly two more weeks, for the release of Chapter 1060, by then, we are sure the fan community will juggle and be up with some strong hints plotting chapter 1060! Do share your reviews with us!