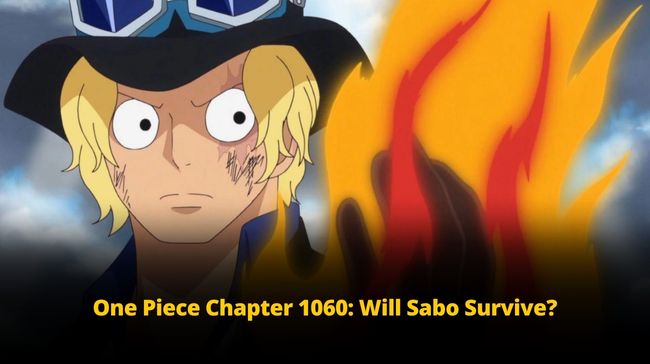 Now that One Piece Chapter 1060 leaks were out yesterday, this chapter gives a heads-up that the series is now reaching its end! It is genuinely the beginning of the finale!!

How is Sabo going to escape his situation in One Piece Chapter 1060? Manga readers will be wondering this for sure! He barely escaped saving his life, and his last scene was in the Lulusia kingdom.

When a mysterious person was sitting on the Empty Throne, Sabo informed the Revolutionary Army about that man. A light was seen in the sky before raining, and the Lulusia kingdom was destroyed.

Sabo was in the wrong place at the right time; the Five Elders believe this, which means he wasn’t the only target.

Now, One Piece Chapter 1060 has left us with another cliffhanger of Sabo.

So, we’ll be seeing that the sworn brother of Luffy, will be able to escape that massive explosion.

We Need To Wait And Watch

This needs to be clear before going any further. For now, readers can assume that Sabo has survived the destruction of the Lulusia kingdom and is fine. He has a deep connection with Luffy and is a significant character. He has also inherited the will of Ace by consuming his former Devil Fruit.

Only for him to let down Ace, in the end, wouldn’t be making any sense of reintroducing Sabo in the storyline. If Sabo is going to die, he should be dying at the end of the chapter and not in the middle. And unlikely, Sabo will suffer an off-screen death with very little foreshadowing.

The Style of the One Piece Creator – Eiichiro Oda

Eiichiro Oda, the director of One Piece, is hesitant to kill the significant characters until and unless it is a flashback.

His writing style differs from writers like George R.R. Martin or Robert Kirkman. A dramatic build-up would have been built if this were the end of Sabo.

m_agus is a Reddit user who has brought some exciting theories about One Piece Chapter 1060. They have used these panels to demonstrate the differences between the citizens of Lulucia Kingdom and Sabo.

He isn’t looking in the sky but rather across a distance. But the citizens of the lulucia kingdom are looking straight above their heads. The differences between the shadows, m_agus believes that from a 45-degree angle, Sabo is watching the sky. They have the idea that he is on a ship on another island.

Now fans, this is all as per One Piece Chapter 1060 Leaks. At last, m_agus is telling us a reasonable explanation about why Sabo would have survived and not gotten hit by Im’s attack.

Sometimes Oda will reveal to us what happened to Sabo in One Piece Chapter 1060. The Manga readers, if they want to know what will happen next, will have to refer to the off contextual hints given to them on the basis of panels.

The fact that Luffy’s dream is finally being revealed hints that Oda, the creator of One Piece, has made up his mind to end the series!! This makes us sad!!!!

The revelation of Luffy’s dream indicates that the saga’s end has begun!!!