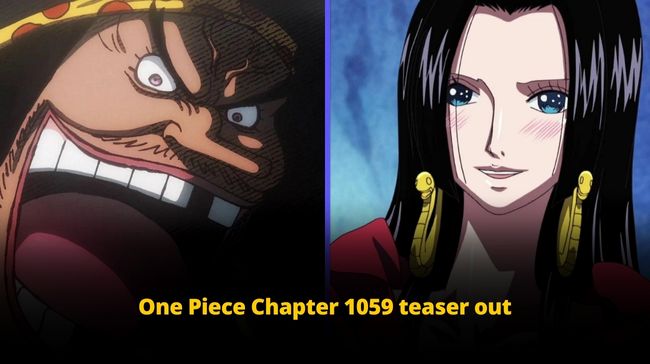 There is no episode releasing this week; the next one will be out on September 12. 2022.

So by the time we all wait for the release, let us share with you all that we get our hands on!!

Some new bits come to our notice every day, so today, we are up here with more such new updates!!

Warning: One Piece Chapter 1059 Teaser AKA Leaks ahead The famous Japanese anime television series – One Piece is produced by Toei Animation and was first premiered on Fuji TV in 1999. Beginning from there, we have seen over 1000 episodes that have been disintegrated into 20 seasons. This makes it one of the longest-running anime we have to date.

It is based on Eiichiro Oda’s manga series of the same name and features the adventures of Monkey D. Luffy, along with his friends who are searching for the ultimate treasure of the world, also known as “One Piece”, and to become the next Pirate King.

Going further from here, there might be some One Piece Chapter 1059 leaks about the upcoming manga issue, so we advise you to go ahead at your own risk!!

This week, we did not have significant spoilers as chapter 1058 had concluded the last arc.

But we expect some solid summaries and raw scans to be released nearby from September 6, 2022, to September 8, 2022. By then, let us share with you what we came through lately!!

A few hours ago, Leaker  YonkouProd dropped a massive hint for all the One Piece fans worldwide! It indicates that Boa and Blackbeard are the ones that will focus more on the upcoming chapters as they are both featured in the image.

Do you want to know more about this in detail?? Do continue reading here!!

If we talk about the hints released in the initial stages, many fans worldwide believed that things might be revolving around Blackbeard. Looking at a newspaper, the image of a crying Perona directly gave us a clue that this chapter would be related to Gecko Moria.

And as Moria and Blackbeard were last seen together, the speculations were high in the fan world associating the appearance of Moria or Blackbeard could be seen with Yonko in the coming chapter!!

Dear Fans, Chapter 1059 is all set to launch on Sunday, September 11, 2022, at approximately midnight JST. For fans around the world from different time zones, we, at this moment, share with you a compiled list of a few of the time zones for your reference:

One Piece Chapter 1059 leaks will be coming up at regular intervals, and we shall keep sharing them with you!!

Read More – Why One Piece Yamato Is Not A Straw Hat?