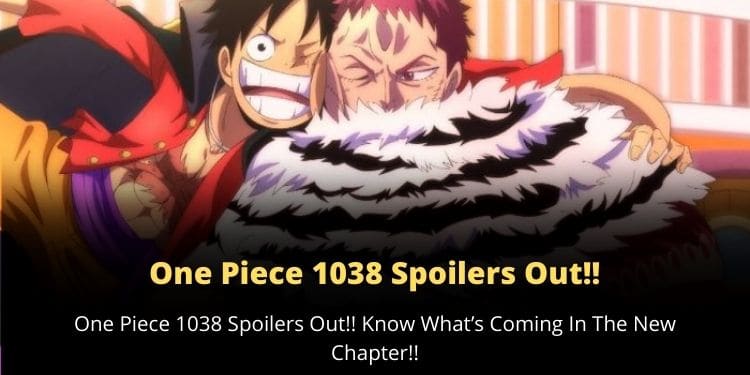 Finally, after a week’s break, One Piece Chapter 1038 is officially landing on our screens on January 30, 2022. However, prior to its official release, there are a ton of One Piece 1038 spoilers and rumors floating around the Internet.

Especially, Reddit has picked out a lot of leaks on One Piece chapter 1308. Therefore, after hassling around many online platforms gathering some verified news, Sassyshow has bagged some major One Piece 1038 spoilers and leaks that will blow your mind.

So, without wasting any more time, let’s jump into the latest One Piece chapter 1038 spoilers and leaks.

One Piece is dropping new chapters of its exclusive manga series under the Weekly Shonen Jump magazine. While the new chapter 1038 was supposed to be dropped on 23 January 2022, i.e., Sunday, like many other manga franchises One Piece too, took a break this week.

So, fans will have to wait for a week more to witness the ultimate ride of thrill and adventure in One Piece Chapter 1308.

One Piece is one of the trending anime series created by Eiichiro Oda. The series surrounds around the central character, Luffy, and his team of pirates who are carrying out some insane adventures during their sailed across the Grand Line.

Chapter 1037 of One Piece opens up with the deadly fight of Luffy vs Kaido on the rooftop. While the fans get amazed with the thrilling combat, on the backside, the storyline goes through other character developments. The plot branches out to the shores of Wano to introduce new elements of thrill.

Luffy Vs Kaido – Who Ultimately Won?

One Piece 1037 covers the deadly battle between the two major characters Luffy and Kaido. The chapter kicked featuring Kaido getting his hands on a big bottle of sake and he got drunk. As the story proceeds, it showcases the various shades of Kaido’s character after he is drunk.

Luffy initially thought that like other creatures Kaido would be weakened after losing his senses, but it turned out to be a completely different scenario. Kaido in this state was far more powerful.

As we penetrate deeper into the story, Kaido showcases four drunken states. Despite facing tons of enemies, Kaido was steady enough to absorb the blows of Luffy. He also shows his desperation to protect the castle during the fight on the rooftop.

Though the fans were expecting the new chapter of One Piece to drop on 24th January, the news of sudden delays came to them as a shock. However, with the rescheduling of the One Piece 1038 release date, the Internet world has opened the doors to limitless rumors.

Zunesha’s return in the last chapter of One Piece 1037 was something unexpected for the fans. The audience was simply stunned by the appearance of Zunesha in the last chapter. But did the creators drive back the character into the scene? What is his real purpose?

Though the creators have not revealed the exact goal of re-introducing Zunesha in the One Piece Chapter 1037, there are a lot of assumptions running in different online communities.

A few fans have revealed that Zunesha is ordered to come here. While the others are claiming that he has broken the deadly curse and has reached the place at his own will. Whereas the real cause is still unknown.

The last chapter of One Piece was a bomb for the fans. It introduced tons of elements that amazed anime lovers. While there were many amazing factors to entertain the fans, one of the most fascinating one was the entry of the World Government Ships into the scene.

But the shocking fact is those are not Navy ships as they showcased the WG flags. So, it seems WG is operating an undercover operation. But what is exactly happening?

Here it will be interesting to see the call of Akainu, the one who should against the Five Elders in the past and he will surely repeat his actions if required. So, with WG stepping into the scene, Akainu will surely play the role of the trump card in One Piece Chapter 1038.

So, make sure to keep an eye on our website as we will be dropping all details in the raw scan soon.
Conclusion

Let us know your thoughts on the new chapter of One Piece. Also, make sure to share this article with all anime lovers and follow us for more interesting content in the future. Happy watching!!