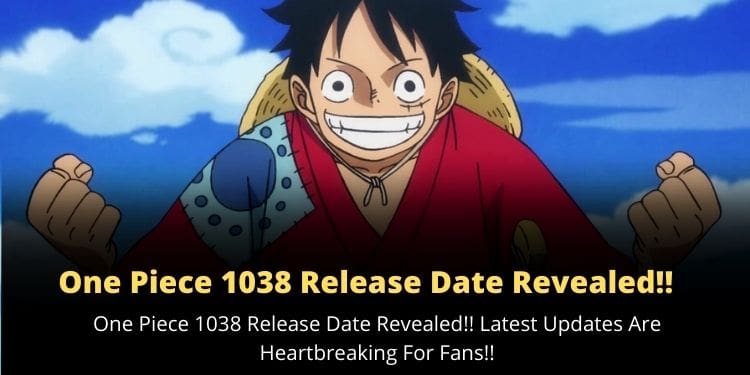 With the climax of the deadly combat between Zoro and King, now the One Piece fans are craving for one more exciting chapter from the franchise. So, when is One Piece chapter 1038 dropping on our screens? Here is everything you need to know about the One Piece 1038 release date.

Chapter 1037 is simply an explosion for manga lovers. Introducing the perfect blend of action, thrill, and suspense, wrapped in a heart-warming storyline, One Piece chapter 1037 has left the fans clamoring for more.

Finally, after a lot of drama, Eiichiro Oda has finished off the deadly combat between King and Zoro. Meanwhile, Sanji has also overpowered Queen.

Although there were a lot of struggles involved which turned the battle on Luffy’s side, Sanji ultimately managed to takeover. However, Monkey D. Luffy’s action with Kaidou, engaging in a terrible fight is still on the cards.

As the manga is unwrapping every chapter, the excitement of the fans is skyrocketing. The entry of Zunesha in the latest chapter has given the fans a reason to whistle out loudly.

So, what are these factors leading to? Is it preparing the stage for deadly combat or the new chapter will feature a piece-of-life setting? Let’s wait for the release of One Piece chapter 1038.

One Piece 1038 Release Date – When Will The New Chapter Drop?

As per the previous leaks, the One Piece 1038 release date was picked up as Sunday 23, January 2022. It was pretty clear that the new chapter will debut on Sunday as the One Piece manga chapters are published under the Shueisha’s Weekly Shonen Jump and they drop every chapter on Sundays.

However, the fans can grab the raw scans that will be available on Friday.

Though the One Piece Chapter 1038 was scheduled for a release on January 2022, the release is now delayed.

Besides other popular mangas such as Black Clover, My Hero Academia, Jujutsu Kaisen, and more, One Piece too, is on a break. As per the official confirmation, One Piece will take a break of one week before dropping its new chapter.

So, what is the confirmed Release Date of One Piece 1038?

As of now, the new chapter of One Piece titled 1038 is scheduled for release on January 30, 2022. Both Manga Plus and Viz Media have confirmed the One Piece 1038 release date. So, we don’t expect any further delays.

One Piece 1038 Release Time – At What Time Will The New Chapter Drop?

Manga Plus has revealed the official schedule to release One Piece 1038. The new chapter of One Piece will be officially revealed on January 30, 2022. However, it is important to note the release time of the new One Piece chapter.

So, the next chapter of One Piece 1038 will be coming next weekend. Therefore, we don’t have any choice other than to wait for the One Piece 1038 release date.

So, here is the One Piece 1038 release date. Let us know in the comment section, what are you expecting from the new chapter.

Follow us for more exciting details on the latest anime shows. Bookmark our page to get all updates first.

1 thought on “One Piece 1038 Release Date Revealed!! Latest Updates Are Heartbreaking For Fans!!”