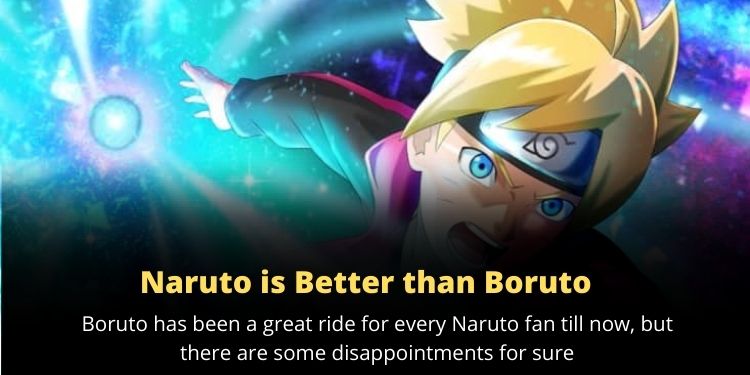 Naruto is Better than Boruto and Here’s Why

Although the series has been quite a ride of emotions, fans are not satisfied with some of the aspects of Boruto, which we will discuss in this article.

Naruto is Better than Boruto

Most of the Naruto fans watching Boruto still miss the old Naruto vibes. They want to see all the characters performing well and making headlines, not just some of the inner friend circle.

In Boruto, many characters got sidelined once the new generation had taken over, and fans were not loving it. Rock Lee has been in the sides ever since Boruto has started. He was the main character in the chunin exam arc in Naruto.

In Boruto, all the main side characters of Naruto got sidelined because of their uprisings. Many fans also claim that the writers have not developed all the characters to their utmost potential like they did n Naruto.

Everyone is quite disappointed in Konohamaru, he is a student of Naruto himself, and he destroyed a Pain unit by himself when he was just a child. But he is shown nothing but a big brother and an average Jounine.

Like Konohamaru, many fan-favorite characters are underdeveloped in Boruot. That was not the case in Naruto, where Every side character was developed to find perfection.

Boruto is better in some ways where fans love the new experient with their favorite series, but there are still some missing pieces. Boruto got the scientific tools to support honing their Justus and mastering all five Justus, but they take away the original fun from the Hand signs series.

Fans miss the fun they had while watching the Hand signs. We all think of Kakashi when he blasted our heads with his fast hand signs. Boruto misses the charm of hand signs, and the series has overused the scientific tools for ninja.

There is no Ninja way in Boruto, they have kept it very low for the shinobi world, and they are showing the Shinobi world’s downfall, which fans are not liking.

One of the most disappointing things about Boruto will be Sasuke’s misrepresentation. Sasuke has been an adversary of Naruto and has shared the stage with him for a decade. Sasuke might not be more powerful than Naruto, but they are quite equal, as we have seen in their battle after the great war.

Sasuke is solely interpreted as the Shadow of Hokage, and he had two to three fights that could show his potential. In the fight with Jigen, Sasuke was seen as the weakest link. He only played the role of transporter and helped Boruto.

Fans looked at Sasuke as the strongest Uchiha ever, and his incapability of fighting side by side with Naruto has disappointed fans.

Naruto has shown as the responsible Hokage in Boruto, which fans love to their heart as they have seen Naruto’s struggle for becoming Hokage. But Naruto in Boruto is not the same. He doesn’t smile that often. His optimist quality was the one that made fans fall in love with Naruto, but it seemed to be changed in Boruto.

Fans were not ready to see the fall of Kurama and the emotional scene of them both together, which has made their hearts cry out loud.

Boruto has been a great ride for every Naruto fan till now, but there are some disappointments and things missing in Boruto for sure. We have listed some of ours. If you guys have some of your own, make sure to comment that down below.