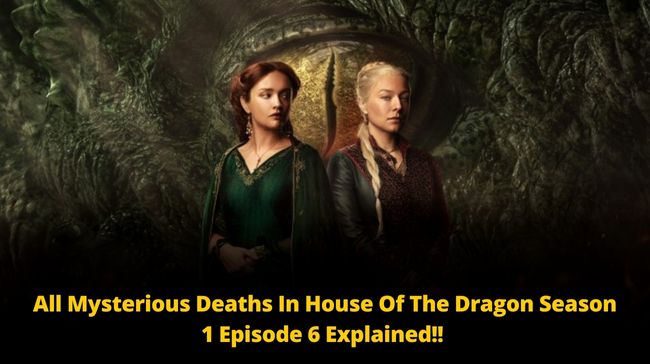 House of Dragons, just like its parent series, Game of Thrones, has kept no shame in killing people.

In Game of Thrones also, we have seen that the series shows no mercy in killing any character. Even if they are the essential character or audience favorites, they must die when the time comes. Not a single amount of mercy is shown in their way of killing also.

Just like this, House of Dragon is also following the same path. So far, we have seen that Aemma Arryn died in episode 1, Crab Feeder in episode 3, and Criston Cole killed Joffrey Monmouth in episode 5.

The killing will continue. The story has started turning toward the war among Targaryen, and many changes are expected in House Of The Dragon Season 1 Episode 6.

Deaths in House Of The Dragon Season 1 Episode 6

When deaths are taking place around the corner of the show, episode 6 will not be an exception.

So far, we have seen three deaths in the House of the Dragon season 1 episode 6.

This involves the unexpected death of Laena Velaryon, leaving Daemon Targaryen without a wife, his kids without a mother, and the infamous Dragon Vhagar without a rider. Followed by Lyonel Strong, dying tragically in a fire.

The impact of his death left two positions vacant, one of Hand of King and the other of Lord of Harrenhal.

The death of Harwin indicates that the birth father of Rhaenyra Targaryen’s children has gone and so does her sworn protector. Their deaths, as of now, have not created any significant impact but will soon change the whole scenario of Westeros.

Why did Laena make Vhagar kill her in House Of The Dragon Season 1 Episode 6?

Laena Velaryon killed herself by using her Dragon. In a scene, the audience sees Laena Velaryon taking her own life by commanding “Dracarys” to her Dragon. It is the most potent command we have seen in Game of Thrones or House of Dragons.

How does Laena Velaryon’s death contradict the book?

In the Book “Fire & Blood,” Laena dies just after childbirth, while it is a bit different in the series.

After the childbirth, she was alive for quite a few days, suffering from a fever and trying to find her way back to Vhagar one last time.

It gives the audience a sense of the idea of how much she loved Dragon riding and, along with it, reflects the degree of pain that a woman goes through in child delivery.

Impact of Laena’s death in House of Dragon

The impact of Laena’s death gives rise to Daemon and Rhaenyra love story, which we already have seen earlier in the season. Major events will take place in Kings Landing as a civil war among House Targaryen will soon occur.

Read More – What Happens To Daemon Targaryen After House Of The Dragon Episode 4?