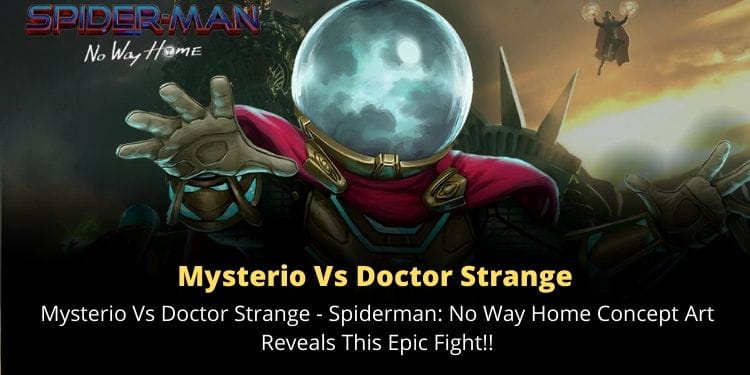 It’s Mysterio Vs Doctor Strange, so we know a true Marvel can’t miss out on this. Here is everything you need to know.

Spiderman: No Way Home is hands down one of the best Marvel movies, introducing tons of old villains from the Spiderman franchise. However, the latest concept art coming out showcases something extraordinary for Marvel fans. So, here is how the end fight could have been in another multiverse.

Recently, the new concept art of Spiderman: No Way Home dropped on social media and it has just stunned the fans. It reveals Jake Gyllenhaal aka Mysterio vs Doctor Strange.

Spiderman: Far From Home led the sole foundation to the plot of Spiderman: No Way Home. Moreover, Mysterio played the role of the key element in the creation of the new Spiderman superhit movie.

Mysterio was the one who openly announced that Peter Parker is Spiderman and portrayed him as a major threat to the world. Though at the end he died, he managed to manipulate the people in the MCU world that Spiderman is behind all the notorious events taking place. This led to all the multiversal chaos.

So, Mysterio was the one who helped Marvel to bring back the super-popular Spiderman franchise villains from Sony’s world. At the climax of Spiderman: No Way Home, we saw all three Spiderman, including Tobey Maguire, Andrew Garfield, and Tom Holland’s Peter Parker fighting with the major threats.

Marvel brought the Green Goblin, Doc Ock, Lizard, Sandman, and Electro back into the scene. While it was a nostalgic moment for the die-hard Spiderman fans, the setting was truly epic.

So, now with Spiderman: No Way Home getting so much popularity and fan craze, the officials are revealing tons of concept art and it seems Mysterio was almost a part of the final fight.

Recently, the concept artist of Spiderman: No Way Home, Andrew Reeder shared some pieces he crafted for the movie and stunned the fans. The concept art reveals Mysterio vs Doctor Strange’s fight. It showcases evil Mysterio combating Doctor Strange around the Statue of Liberty.

Though Mysterio was not a part of the final battle and he was killed in Spiderman: Far From Home, the concept art suggests something else. It makes it pretty clear that Mysterio is still alive or he may be from the multiverse.

So, there may be a future possibility of Marvel using the character of Mysterio. However, it would be really interesting to see how the officials use this character in Spiderman. Make sure to stay tuned as we will pass on all hot updates on the upcoming Spiderman movies.

So, what do you think it would have been if Mysterio joined Spiderman: No Way Home as the main villain? Share your views on Mysterio vs Doctor Strange in the comment section.

Follow us to get all updates on the latest Marvel movies and series first.