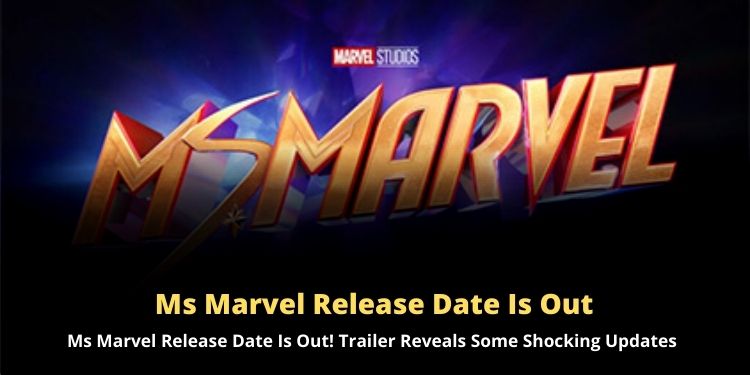 Ms Marvel trailer is finally here, and it reveals Ms Marvel release date. So, here is everything we know about the new Marvel project.

The next major Marvel streaming show’s hype train is about to depart the station. Ms. Marvel will be released next, on June 8, 2022, according to Disney. Kamala Khan, a Pakistani-American adolescent who idolizes Captain Marvel before getting her own powers, will be introduced to the MCU in Ms. Marvel. The clip displays a similar set-up, but with what appear to be some significant deviations from the character’s comic book beginnings.

In the comics, Kamala is part of a new breed of Inhumans who gain their abilities from the Terrigen mists that have been released on the world. But, given the baggage that the Inhumans bring to MCU-centric titles, it appears that Marvel Studios has tinkered with her origins a bit.

The teaser hints that the MCU Kamala will obtain her powers from what appears to be a mystical bracer, rather than being impacted by Terrigen mist-like in the books. While we can see that this Kamala retains her ‘enlarging’ abilities (enabling her to shapeshift and acquire superhuman strength), it appears that she also has the ability to produce cosmic material that she can toss, walk on, or use as a shield in the MCU.

The teaser also shows us her high school life, the object of her loves, and her home life, as well as confirming that she is still a devout Muslim in the MCU. The show’s enemies are less well-defined, with only hazy glimpses of who she’ll be fighting and why. Kamala Khan is played by newcomer Iman Vellani, and the show has directors from Bad Boys for Life, The Punisher, and more. Ms. Marvel is set to return in The Marvels when this episode concludes.

The series will premiere on June 8, sandwiched between May’s Doctor Strange in the Multiverse of Madness and July’s Thor: Love and Thunder in the Marvel Cinematic Universe. Moon Knight, which launches on March 30, comes before all of that. On February 17, 2023, The Marvels will be released in cinemas.

So now that you know Ms Marvel release date, tell us what are your expectations from the new Marvel project.

Also Read – Arishem Vs Galactus – Who Will Win?