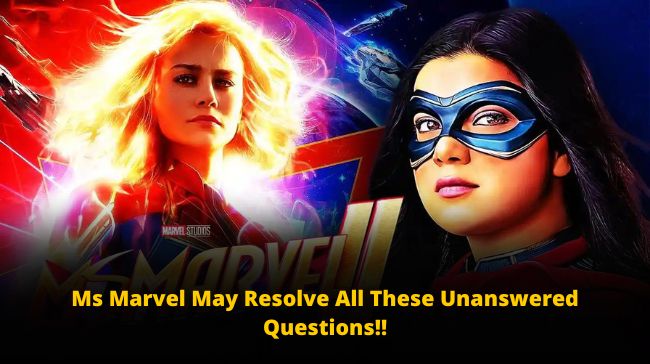 The series serves as an introduction to Kamala’s character as well as a possible continuation of the Captain Marvel plot. Kamala has already been confirmed to feature in the next sequel The Marvels, so Ms. Marvel should be able to give some clear lead into that.

This article will tell you about how she got powers , & we will also discuss about the whereabouts of Nick Fury and about the antagonist for Ms Marvel.So keep reading this article to know about Ms. Marvel episode 2 and the future of the show.

How are her powers different? Kevin Feige has already acknowledged that Kamala’s powers in the Marvel Cinematic Universe will be different from those shown in the comics, but he hasn’t said how much of a difference there will be as compared to comics, from the very first episode, it’s evident that Kamala possesses a unique set of abilities not seen in comic books.

Instead of the shape-shifting and also limb-extension abilities that come with her Inhuman heritage, the show appears to be giving Kamala powers that are more like those of Carol Danvers. These are the things that we know from Ms Marvel episode 2 of the series will open more secrets about her powers.

The Ms Marvel episode 2 is already out and there is no sneak peek of Ms Marvel Carol. The two characters must meet at some point, and having this meeting in MS Marvel series would be an excellent opportunity to tie this very isolated plot into the larger MCU.

It will be a great plus for the show, which now solely features characters who are unknown to the public.

The relationship between Kamala and Danvers is set to be exciting and interesting for the MCU’s future, but it’s unclear whether their first encounter will happen in. It can be in Ms. Marvel, not The Marvels, or at some unspecified moment in between.

Where is Nick Fury?

Fury has been off-world for almost a year, according to Spider-Man: Far From Home, putting his withdrawal from the planet amidst the time of Avengers: Endgame.

Although some MCU fans believe Nick Fury has always been a Skrull, it seems more plausible that he has a secret agenda that will soon be revealed to the public.

Agent Nick Fury of S.H.I.E.L.D. played a major part in Carol Danvers’ origin tale, so it’s only natural that he’d want to be engaged in Kamala’s as well.

The only problem is that Fury’s current whereabouts is unknown – and that the Fury on Earth is a shape-shifting Skrull named Talos who has usurped his identity.

Who is the antagonist?

Ms. Marvel might face a slew of foes, and her comic book origins mean that almost anyone could be a threat. It will most likely be a villain who has yet to be introduced in the MCU, though there’s a potential they’ll be connected to Captain Marvel’s plot in some way.

Kamala’s acquisition of her talents appears to have triggered some bad force to begin hunting her down, or at the very least bring her to their attention, but it’s unclear who or what that terrible force will be.

As she obtains cosmic powers and becomes the titular Ms. Marvel, she books her place as the new avenger & this series will serve as an origin story for the character.

MS Marvel episode 2 is now available on Disney+ Hotstar. Go and watch and you must tell your views about this new series in the comment section!