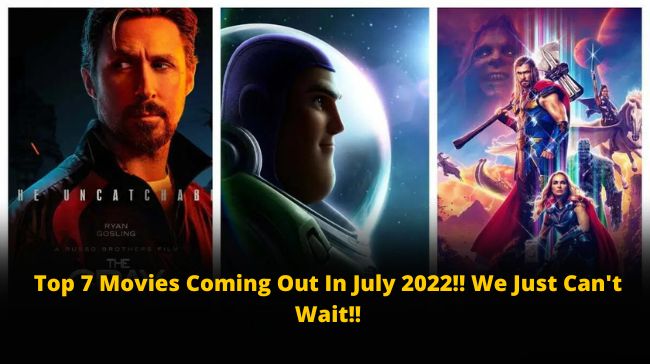 The most recent MCU film, Jordan Peele’s most recent horror film, the Russo Brothers’ most recent endeavour, and many other films will be released in July 2022.

This article will highlight the most hyped movies coming out in July 2022. So keep reading the article!

Movies Coming Out In July 2022

Some of the most eagerly awaited films of the year from many genres will be released in July 2022, including the most recent Marvel Cinematic Universe film, the Russo Brothers’ latest endeavour, Jordan Peele’s most recent horror film, and an independent superhero film from the DC Universe.

With the release of the Minions’ most recent animated adventure, the return of Thor and company, the Russo Brothers’ most recent film that is not a superhero story, Jordan Peele’s most recent horror film, and a unique take on DC’s superheroes, July will see some of the most anticipated movies of 2022 hit theatres.

There will be something to appeal to viewers of all ages and tastes. These are all the movies that will be released in July 2022.

This movie is based on Lawrence Osborne’s 2012 novel of the same name; John Michael McDonagh wrote and directed the drama-mystery film The Forgiven.

Thor: Love and Thunder appearance of Thor and his companions marks the continuation of the MCU’s growth.

Thor: Love and Thunder, which is set after the events of Avengers: Endgame, will have Chris Hemsworth’s character, the God of Thunder, trying to find inner peace before being propelled back into action to stop Gorr the God Butcher (Christian Bale) from eradicating all the gods. This is one of the most hyped MCU movies coming out in July 2022.

The mystery-drama film Where the Crawdads Sing, which Olivia Newman is helming, is based on the same-titled Delia Owens book.

After being abandoned by her parents and elder siblings in the 1950s, Catherine “Kya” Clarke (Daisy Edgar-Jones), a cunning young woman, grows up in a marsh in North Carolina. Chase Andrews (Harris Dickinson), a quarterback who seduces Kya with promises of marriage that never materialize, teaches her how to survive on her own. When Kya breaks up with Chase, he attacks her. Chase is discovered dead, with Kya as the main suspect.

An animated martial arts comedy, Paws of Fury: The Legend of Hank, takes some vague cues from Mel Brooks’ Blazing Saddles from 1975.

Anthony and Joe Russo’s action thriller The Gray Man is based on Mark Greaney’s 2009 book of the same name.

Jordan Peele is the author and director of the science fiction horror film Nope.

They, together with the locals of their little town, witness a strange and bizarre supernatural event when random objects begin to fall from the sky.

In this article, we have discussed all the movies coming out in July 2022. We hope you enjoyed reading this article! It looks like July month will be intense & full of the family drama and intrigue that fans will come to love. We can’t wait any more to watch such exciting movies!