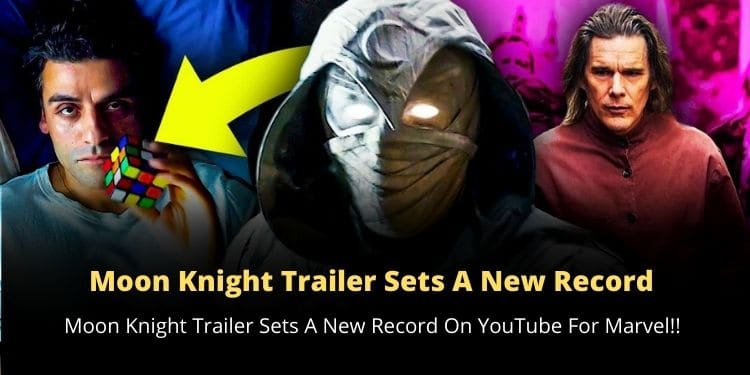 With every new series, Marvel is setting a new benchmark. The official Moon Knight trailer has just set a new record on YouTube. Here is everything we know.

The official announcement of the Moon Knight series fuelled an immense hype among the fans. The true Marvel comic lovers have been showering their fan theories in different Marvel forums as well as on social media.

So, with so much craze around the Moon Knight series, it is no surprise that the official Moon Knight trailer has just set a new record on YouTube. Within a few moments of its arrival, the trailer went viral, and the fans started showering their love on it.

As of now, the Moon Knight’s trailer has become the first trailer from Marvel to stack up a million of likes on YouTube. Featuring Oscar Isaac, the Moon Knight trailer created a buzz among Marvel fans.

Moreover, the fans are expecting new characters from the Marvel comics in the upcoming series. So, the hype to witness these characters on the screens for the first time has generated a huge fan craze.

According to sources, the previous benchmark by a Marvel series was 915K likes, racked up by the Hawk-Eye series. While series like Wanda Vision, Loki’s second part, and The Falcon and Winter Soldier got 760K, 723K, and 695 K likes on YouTube, respectively.

Sources of Sassyshows have revealed, the Moon Knight trailer was a boom for the franchise. Within a day of its release, the trailer racked up around 75 million views and tons of comments. However, if we compare it with the Falcon and Winter Soldier trailer, Moon Knight is far behind as it got 125 million views in total.

However, the Moon Knight trailer beats the other Marvel ventures like Wanda Vision, Hawkeye, and Loki by a large margin. Moon Knight created immense hype among the fans and it got around 263K mentions on social media.

As of now, the Moon Knight’s trailer has got over one million likes and over 42K comments on the official Marvel Entertainment YouTube channel and these numbers are rapidly increasing.

Moon Knight Release Date – When Will It Drop?

Moon Knight is scheduled for an official premiere on March 30, 2022. So, fingers crossed, and let’s hope for something explosive to drop on our screens.

Hope you liked the article. Make sure to stay connected as we keep on posting fresh news on the latest Marvel series and movies daily. Bookmark our page, so that you don’t miss any fresh updates. Happy watching!!