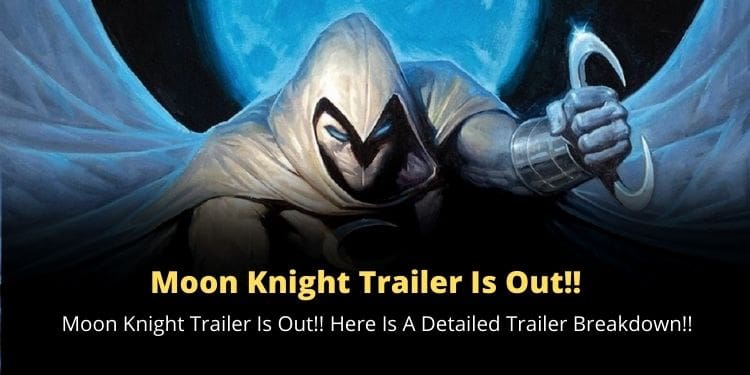 All Marvel fans, get ready to dive into the world of darkness. The official trailer of the much-awaited Marvel venture, “Moon Knight” is already out, and it’s a blast. Starring Oscar Isaac and Ethan Hawke in the lead roles, the Moon Knight trailer has racked up tons of views and comments within a few moments of its launch.

The trailer is simply amazing. It promises a world of utter chaos wrapped in the drama and the magic of Marvel Studios. So, fans, are you ready to explore the dark side of MCU? If yes, without any further ado, jump into the article to see a detailed analysis of the Moon Knight trailer and know what’s coming.

The official announcement of Moon Knight was really shocking for the fans. Marvel’s attempts to drive in some comic characters to MCU have created great hype among true Marvel lovers. While the fans were craving for the release date of Moon Knight, back a few days, Hulu, the popular streaming platform leaked some clips of the movie which made the fans go crazy.

Back a few days back, the officials dropped the teaser of Moon Knight which broke the Internet. Presenting Oscar Isaac as the new hero, Moon Knight, the teaser delivered the perfect blend of fantasy, suspense, thrill, and action.

New Moon Knight Trailer – The Official Trailer Is Out!!

Finally, the much-awaited trailer of Marvel’s upcoming series, Moon Knight has arrived, and it is just an explosion for fans. With a few minutes of arrival, the Moon Knight trailer has grabbed tons of views and comments.

So, what do you think about the new trailer for Moon Knight? Hope you liked the official Moon Knight trailer and our article too. We will be updating you from time to time on the upcoming Marvel movies and series. So, make sure to follow us. Also, bookmark our page to get all fresh updates first.

1 thought on “Moon Knight Trailer Is Out!! Watch It Here!!”