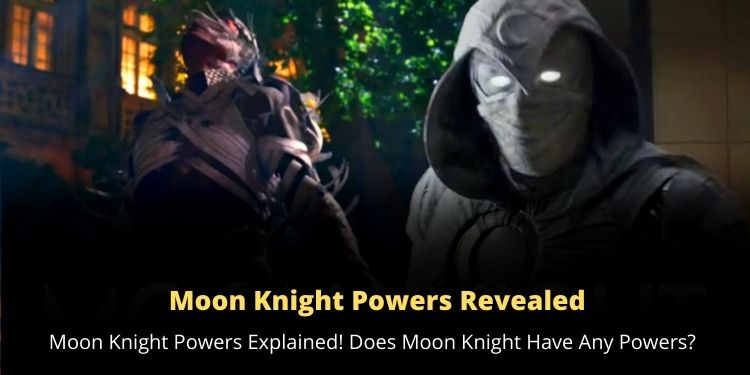 With the arrival of a new MCU character, the fans are pretty curious to know about Moon Knight powers. So, does Moon Knight have any powers? Here is everything we know so far.

When it comes to MCU, most of the superhero characters come up with a compelling backstory on how they climbed the ladder of powers. Whether it’s the tech freak Ironman or the Spider attacked Spiderman, every character points out to a source of their magical abilities.

So, how Marvel’s latest character, Moon Knight gets his powers? The trailer and all of the sneak peek revealed a bunch of major hints on Marc Spector aka Moon Knight’s abilities. So, here is all you need to know.

Often referred to as Marvel’s version of Batman, Moon Knight’s character has much more to offer the fans. With the trailer and the comic book story, it’s pretty clear that Moon Knight would be one of the most complex superheroes in the Marvel world. But what exactly can Moon Knight do? And how will that translate to the MCU?

Moon Knight’s origin story is a bit emotional and connecting for the fans. After being mercilessly beaten to death, Marc Spector was left dying alone in the desert, when Khonshu, the Moon God revived him.

Since then Marc got his hands on some insane magical abilities. Moreover, Marc was trained in the U.S. Marines which made him an expert in hand-to-hand combat, Boxing, Silat, Savate, Kung Fu, Muay Thai, and more.

Does Moon Knight Have Any Powers?

As per the comics, Moon Knight’s full potential is solely dependent on the Moon. The powers of the characters get amplified in the nights of full moons.

Moreover, there are some similarities between Moon Knight and DC’s Batman, which makes the Marvel hero be a great detective and interrogator.

He is also a brilliant Marksmen who can throw and use all types of weapons at its best. Apart from these, Moon Knight powers include telepathic resistance, which enables Marc to resist any energy from controlling or possessing his mind.

Summing up all, Moon Knight can be titled an Avatar of Khonshu, the God of Moon.