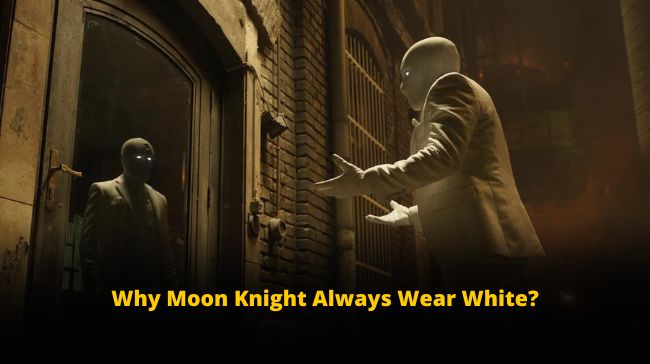 Marvel Moon Knight has finally revealed the reason behind the selection of white color as its costume.

The infamous Moon Knight has already ruled the audience’s hearts after its season 1 release. The Moon Knight costume is white from head to toe. But why? Here is all we know.

The reason behind the Moon Knight costume’s white color is confidence!!

It is said the character gains confidence by wearing white color. However, Marvel has some different plans for it. The new story has brought us to light why Moonlight costume is always white.

The established explanation was to let the enemy know that he is coming, while in its new part, “A Hard Day’s Knight,” in Moon Knight: Black, White and Blood #2, viewers learned that there is a far more tragic reason. Fans are already excited after hearing the season 2 reveal.

Why is Moon Knight not Marvel’s Batman?

Many fans believe that the Moon Knight costume signifies that he is the Batman of the Marvel Universe.

The upcoming season confirms that it’s the other way around. Comic books are built around a particular color scheme. They choose a set of colors; then, they revolve around those only.

They never try to play differently from them. Such a mindset helps in attracting the viewers. Consider Marvel and DC, for example. DC always tends to choose a dark theme, whereas Marvel always tends to play with colors.

Marvel has assigned colors like “black, white ,and red” to some of their deadliest, like Deadpool, Wolverine, and Elektra.

Something about the Moon Knight Season 2!!

David Pepose, Leonardo Romero, and Chris Sotomayor have many plans for the Moon Knight Season 2.

For instance, the Moon Knight costume has been reworked into an all-new white color. The series unlocked with the Moon Knight in his mister outfit, making an appearance at an all-night eatery, assaulted and blood-stained.

The waitress, and per her daily schedule, has kept the café open, especially for him. On the table, Moon Knight was welcomed by his different identities, which are Steven Grant, Jake Lockley, and recently returned Marc Spector.

Those people who were lost always had their back during times of trouble. In the confession of Moon White, he agrees that he wears white in not only in order to signal to the enemy he is coming but also to remind himself about the blood on his hands. Fans are already wild after reading this scene and are all set for the upcoming Moon Knight season 2.

For the Moon Knight costume, though the color has remained white, the changes which are done are worth watching.

The crowd roar is already surging for season 2 since the end of the previous season. Let’s wait and find out what this magnificent season 2 has plans for us!