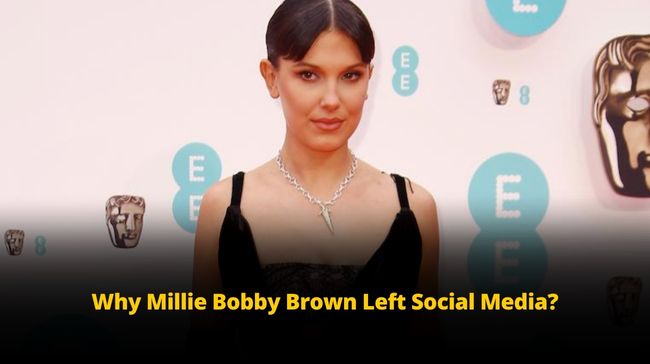 We are still not over the Eleven vs. Vecna aura, and Stranger Things is back in the news!!

Stranger Things fever has not yet settled, and we have a new buzz around our favorite character Eleven AKA Millie Bobby Brown, who has opted out of her social media accounts!

The Stranger Things star shared that she has logged out of the social platforms posting immense negative vibes online. Millie Bobby Brown was only 12 when she first made her debut in Stranger Things in 2016.

How Did Milley Bobby Brown Get Famous?

The actress got famous for her role as Eleven in the favorite amongst the top ten series of Netflix – Stranger Things (2016). She also earned a Primetime Emmy Award for an Outstanding Supporting Actress in a Drama Series at 13.

In a recent interview with Allure, the actress shared how she preferred to pull out the plug when she received so much online hatred.

She also shared how difficult it gets to be hated when you are still trying to figure yourself out. So it seems the actress chose to cut the wires from social media.

In a recent interview, the Stranger Things Eleven actress shared how the social media aura makes her wonder what the expectations of the viewers from her are. She is still trying to cope with herself.

Each day she tries to quote herself but then tries to change the course in the hope that she will not be hated for what she does. But then she has given it up now and thought to be away from this toxic zone! Millie Bobby Brown is deaf in one of her ears as she was born partially deaf in one ear, but as time passed, it became entirely deaf. In the past, the actor was admitted to the hospital as well. So the only social media platforms where Millie Bobby Brown is still active are Instagram’s new Facebook. She has her team handle these accounts for her.

The only way where Millie Bobby Brown communicates directly with her fans is through blog posts that read diary entries on the Florence by Mills website, and she says that interaction works as “nobody can comment.”

The actor Millie Bobby Brown has moved on to social media platforms to ensure she is nowhere surrounded by the burden of expectations and any negativity or hatred coming from such handles!!

The Stranger Things actor does not want to be surrounded by any more hatred, especially when she is unaware of the reasons for it!!!