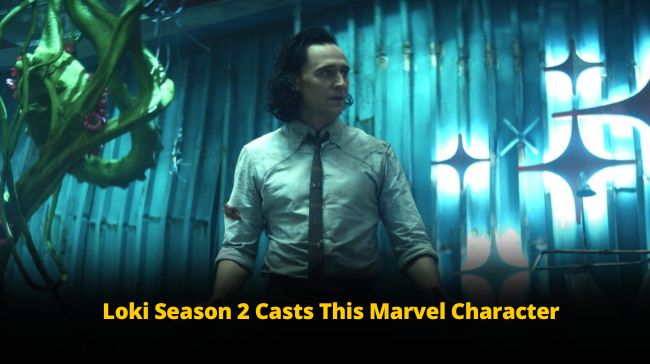 Heyyy.. Look who’s back,  with the second season, The Marvel series that you binge-watched on Disney+.

Here is a super exciting update on the series that you love the most, Loki Season 2…

Rafael Casal, a well-known writer and actor, has been cast in a prominent part in Loki Season 2.

The  God of Mischief, played by Tom Hiddleston, is back in Loki, the most popular Marvel program on Disney+. A different version of the figure who stole the Tesseract during the events of Avengers: Endgame is the story’s subject. Loki is captured by the clerical Time Variance Authority (TVA), who gives him the assignment of locating a different variation responsible for the murder of TVA agents.

Aren’t you excited with this news of Loki Season 2 cast??

There are currently few details available about Loki Season 2 cast. After Sylvie (Sophia Di Martino) killed Jonathan Majors’ He Who Remains, a rip-off of Kang the Conqueror and the man behind the TVA curtain, Season 1 ended with significant modifications being made to the timeline. The multiverse is immediately freed due to Sylvie’s choice Loki and Mobius (Owen Wilson) forget they ever met..

Director Kate Herron will be replaced by Moon Knight’s Justin Benson and Aaron Moorhead, and Eric Martin will reportedly take on the role of new chief writer. The original cast is expected to return as Loki season 2 cast.

About the new entry in Loki Season 2 Cast!

Rafael Casal, the star of Blindspotting, has joined Loki Season 2 cast, as reported by Deadline on Friday.

The viewers already knew he would appear after a leaked set shot from Loki Season 2 showed him walking with Wilson and Hiddleston as a mysterious figure.

Although Marvel has not yet confirmed the casting, the story claims that Casal will portray Zaniac and have a “big role.”

If the rumors are to be believed….

Previous Loki Season 2 pictures revealed a Marvel Easter egg in which the comic book character Brad Wolfe was seen on the poster for a serial killer movie set in the world.

This immediately led to rumors that Zaniac might show up in Loki since, in the comics, Brad becomes the homicidal bad guy after being taken over by a mysterious force that feeds his bloodlust for attractive women. Casal’s facial characteristics, as some have noted, like Brad’s from the Zaniac movie poster, it’s pretty likely that the actor will play a role in Loki season 2.

Secrets yet to be revealed

No information concerning Casal’s participation would be disclosed before the show’s launch because Marvel operates under a tight code of confidentiality.

Things expected in the Loki Season 2

According to Hiddleston, Loki Season 2 will address the most pressing issues from season 1 and detail the effects of violating the Sacred Timeline.

Casal’s figure will likely be connected to the branching timelines in Season 2, and Loki and Sylvie will have to eliminate the alleged bad guy and end the conflict.

We are equally excited to give you further updates on Loki Season 2.

Please show us excitement in the comment section and stay tuned for more updates.