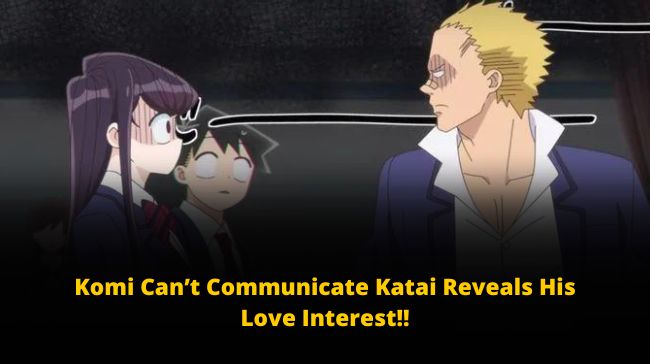 With the latest spoilers of Komi Can’t Communicate popping out on the internet, Sassyshows is here to unveil Komi Cant Communicate Katai’s new love interest. So, here is all we know so far.

How many of us try to deal with our communication problems by making lots of amazing friends but still fail every time? So many of us, right! There’s always one person in the group who knows how to communicate the right way, but a few still can’t. But they don’t give up and keep trying.

Not many web series, movies, and shows are such which can help these people. But, thank god—We have this series that presents this problem in such a humorous script; yes, we are talking about the famous Japanese Series “Komi Can’t Communicate!”

Komi Can’t Communicate is a Japanese manga series written and illustrated by Tomohito Odo—There’s something which we love about the Japanese Series—It’s just so fun to watch!

Komi Cant Communicate Katai is Hirohito Tadano’s newest friend and the latest newcomer, but is he interested in being friends or more with Tadano?

Despite being the toughest, Komi Cant Communicate Katai is just too far from being a bully. Instead, he’s a fantastic, truthful guy looking for meaningful human connections. But like Shoko Komi, this champ also struggles to initiate a conversation due to high social anxiety—Does that happen with you, too?

But luck favors Katai as his highly skilled friend Tadano understands everything before Komi even thinks of it. Magical powers, huh?

This is enough for him to befriend Tadano, and the two boys have always been in touch since then.

In the first story, Osana plans a New Year get-together. Because of the winter break, Katai was busy with his trainer. But when he got a call from Tadano, this invitation excited him so that he couldn’t wait to plan the next outing with him!

After the first story, Katai and Tadano have made plans to meet. Kate agrees to ice skating, even though he has never done it before for Tadano. All he wants is to have a good time with Tadano every time.

Amazingly, in one scene, in the end, Katai falls on Tadano’s back, and he catches him. OMG, this made Katai blush, too. Tadano guides him for skating, while Katai feels extremely happy thinking he’s getting closer to Tadano. More than interested in improving his communication skills, he’s just so peaceful to have Tadano by his side. Isn’t it enough to like someone so much?

Let us know, would it be interesting for you guys to see Komi Cant Communicate Katai, thus giving hints he has a crush on Tadano?