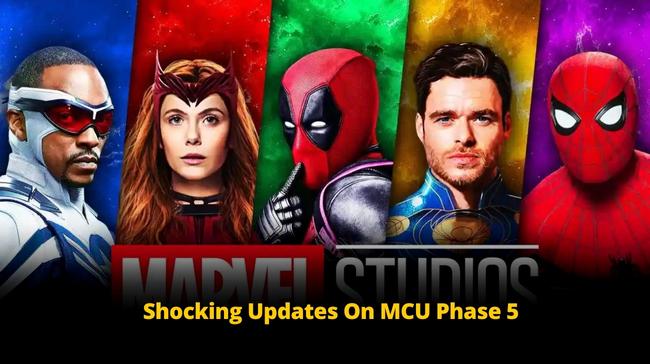 All Marvel fans assemble as Phase 5 is crashing on the screens soon. The franchise has announced the blockbusters dropping in MCU Phase 5. So, Sassyshows is here with the hot updates!!

Fans, we know, this year has been a crazy ride for your guys. Right from diving into the multiverse of madness, to Moon Knight’s mystery and grooving with Thor’s journey to the hype for Wakanda Forever, 2022 has given us tons of goosebump moments. But is it the end? Definitely not. The creators have announced MCU Phase 5 movies and series dropping in 2023-24. The Marvel boss Kevin Feige has revealed a bunch of unexpected things at the San Diego Comic-Con 2022. So, here is all we know so far…

MCU Phase 5 Will Be Loaded With Shocks Marvel lovers, get ready to witness the third chapter of the Ant-Man series. Apart from the main characters, Kang, the Conqueror will be the main highlight of this part. Scott Lang has finally saved the universe and it’s time to unwrap a new chapter of his life!!

Ya fans, so finally it’s coming. It’s been a while since Marvel teased the return of Nick Fury and now it’s finally happening!! The latest series will feature Nick Fury and Talos, teaming up against the Skrulls. At the Comic-Con 2022, Cobie Smulder titled the upcoming series a “guessing game” between the humans and the Skull.

We know you are waiting for it and the official release date is finally out. Though the appearance of the Guardians of the Galaxy team in Thor: Love and Thunder was a cherry on the cake. It will be pretty incredible to witness a new chapter in the journey of the Guardians.

James Gunn will be back with his new installment of the Guardians of the Galaxy in May 2023.

It seems Marvel is ready to pass the legacy of Hawkeye on new shoulders. The upcoming Hawkeye spinoff series, Echo, will be dropping in Summer 2023. The series will feature Alaqua Cox’s Maya Lopez. As per the latest rumors, Charlie Cox and Vincent D’Onfrio will also be a part of the upcoming series.

After a bombastic season 1, there’s no doubt that the sequel of Loki is one of the most anticipated series in MCU Phase 5. The fans are simply counting days for the God of Mischief to be back.

Captain Marvel is ready to return with new adventures in The Marvels which is set to be released on July 28, 2023. Apart from her character, we may get to see Ms. Marvel in the movie, after the shocking ending of the series.

MCU Phase 5 will surely be a gift for the fans. The all-time best superhero movie is getting a reboot. Under the direction of Bassam Tariq, Mahershala Ali will be the lead half-vampire.

Ironman’s exit from the scene was heartbreaking. But fans, get ready to witness the entry of a similar character, Ironheart, who is actually an engineering student who has a passion for weaving technical stuff…

Remember the terrifying witch from WandaVision? Yes, she is getting her own series in MCU Phase 5. It’s an official WandaVision spinoff series that will explore the character of Agatha Harkness.

Charlie Cox’s appearance in Spiderman: No Way Home rang the bells for the return of Daredevil. While the fans were waiting for the official confirmation, Kevin revealed that Daredevil is officially entering MCU in Phase 5.

Sam Wilson aka our new Captain America will be donning the shield once again as he will be back with a new chapter. New World Order is the title of the first episode of the series!!

MCU Phase 5 will introduce a team of antiheroes of reformed supervillains. The movie will be directed by none other than Jake Schreier.